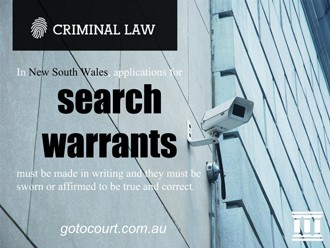 Each state in Australia has laws for the issue of search warrants. A search warrant is a written order from a judicial officer which gives the police the power to enter the premises named in the warrant and search them. Without a search warrant police can only come into your premises if you allow them to, or if they believe there is a crime in progress, or to arrest someone that they believe is inside

Application for a Search Warrant

An application for a Search Warrant must set out the reasons that the police have for believing that they will find evidence on those premises. The police must satisfy the issuing Justice (who can be an authorised justice, a magistrate or a judge) that they have reasonable grounds to believe that there is, or will be at the time the warrant is executed, things that is connected with the offence and that the search is likely to lead to an arrest. The offence must be an indictable offence, or a firearms, drug, stealing or child pornography offence. The justice who issues the warrant must record the reasons why they granted the issue of the warrant or the warrant is invalid. The warrant lasts for 3 days unless it is extended by the justice. The police must provide a report back to the justice within 10 days of the warrant being executed.

There are extra police powers when a search warrant is for ‘drug premises’, which are believed to be used for the making or selling of illegal drugs. Only police officers of or above the rank of sergeant can apply for these warrants. If the warrant is granted the police have the power to search the premises and any person found on the premises.

Covert search warrants are warrants that may be executed without the knowledge of the occupier(s) of the premises.  They can only be applied for by police of the rank of Superintendent or above and the application has to be made to a Judge in the Supreme Court. They can only be used in investigations of serious offences with a penalty of at least seven years jail. They authorise not only a search of the premises but also any adjacent premises without notice to either of the owners or occupiers. The police are allowed to impersonate any person to gain entry to the premises and they are allowed to do anything necessary to cover up their search. The warrant must be executed within 10 days of being granted.

The NSW Crime Commission is concerned with organised crime. Applications for Search Warrants under the Act can only be made by the Commissioner or Assistant Commissioner of Police. A search warrant can be issued if there are reasonable grounds to believe that they will find evidence to be used in court to do with an offence connected to organised crime (or that they will within 1 month) and that if they don’t seize it will lead to it being concealed, lost, mutilated or destroyed, or being used in committing an offence. Otherwise, these Warrants have to follow the same rules as those under L.E. (P.A.R) Act 2002

Applications for a Commonwealth Search warrant must be made to a Magistrate in the Commonwealth Court. It authorises a search for evidence and must be executed by midnight on the 7th day after it is issued. If the Police officers wish to be armed when they do the search, they must ask the Magistrate to authorise that.

Police executing a search warrant must give to a person who is at the premises an “occupier’s notice”. It must be handed to an occupier of the premises who is over 18. That notice sets out the details contained in the warrant. If the occupier wants to see the Warrant, the police must show that too. Entry can only be refused if the premises are not the ones named on the warrant or the time or date on the warrant has passed.

Searching people during the execution of a search warrant

For state and crime commission warrants, police  may search any person in the premises if they believe that they might have something on them that is being searched for with the warrant, or is connected to any other offence. For Commonwealth warrants, they must ask the Magistrate to authorise a search of people at the time that they apply for the warrant. Police do not have the power to question or interview persons while they are executing the search warrant but any questions and the answers given will be recorded as the search is videotaped and may be used as evidence in court.

What happens if the correct procedure is not followed?

If the correct procedure for the issue of the search warrant has not been followed, or the police have not followed the law when executing it then the court may rule that the warrant and search are invalid. If that happens, then any evidence collected was done so unlawfully and the court might refuse to include it.  An invalid search warrant may also mean that the occupiers or owners of the premises searched may have a legal claim against the police for trespass, damage, assault, unlawful arrest or for the return of their goods.

In New South Wales, applications for search warrants must be made in writing and they must be sworn or affirmed to be true and correct. The relevant laws in New South Wales are in Part 5 of the Law Enforcement (Powers & Responsibilities) Act 2002, Division 3 of the Crime Commission Act (NSW) 2012,  and in Section 3E of the Crimes Act (Commonwealth) 1914.