Today (31 August) the High Court of Australia delivered its judgment in the Queensland Prosecution’s appeal of the murder conviction downgrade of Gerard Baden-Clay.

In a decision which has been described as a win for common sense, we get to the bottom of the High Court’s unanimous decision to restore Baden-Clay’s murder conviction, and with it, his original life sentence with a minimum of 15 years in prison.

The Queensland Court of Appeal Decision

A Queensland jury convicted Gerard Baden-Clay of the murder of his wife, Allison Baden-Clay on 15 July 2014 after a highly publicised trial. The Prosecution’s case was highly circumstantial, however, the jury delivered a guilty verdict.

Baden-Clay appealed the murder conviction to the Queensland Court of Appeal. There, the Court of Appeal agreed with Baden-Clay’s lawyers that the Prosecution did not sufficiently rule out other possibilities which led to his wife’s death. Specifically, the possibility that there was a physical confrontation between Baden-Clay and his wife which led to him delivering a blow which caused her death without intending to cause serious harm. The Court of Appeal ruled that this scenario was such a reasonable possibility that the Court found the jury’s verdict was unreasonable. 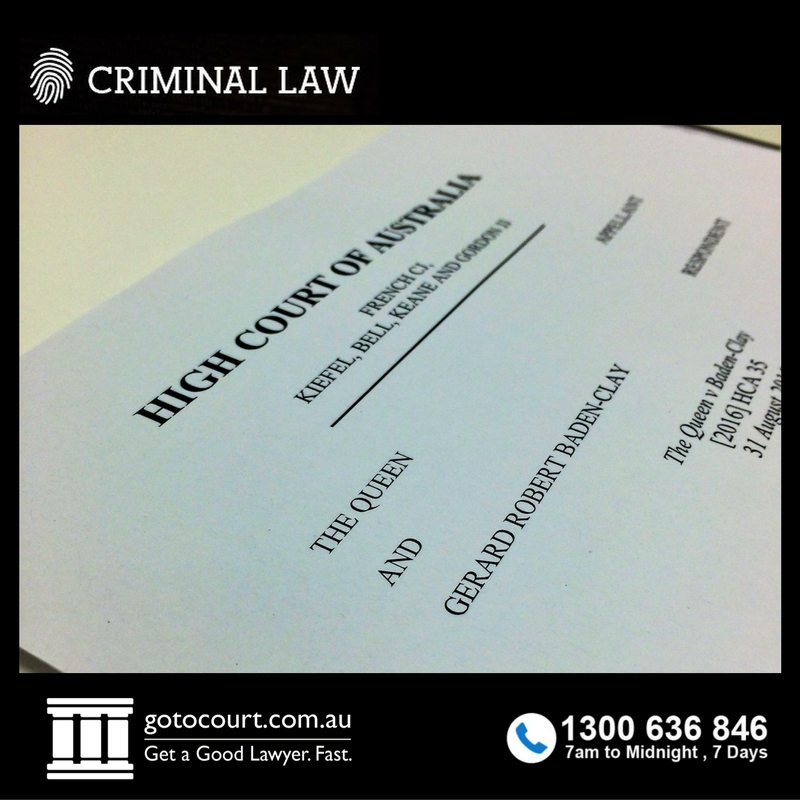 It was this specific hypothetical the High Court took issue with from the Court of Appeal’s decision to lower the conviction from murder to manslaughter. All 5 Judges of the High Court agreed that the hypothetical scenario was at odds with the evidence Baden-Clay gave at the trial.

In circumstantial cases it is up to the Prosecution to prove (beyond reasonable doubt) that there are no other viable explanations consistent with the innocence of an accused. When Baden-Clay gave evidence at his trial, he specifically ruled out his presence when Allison died. However, the Court of Appeal’s decision was based on the assumption that Baden-Clay had killed his wife but did not intend to cause serious harm. As we previously noted, this is not the same as admitting guilt but instead was an acceptance of a conclusion based on an interpretation of the evidence.

A major part of the High Court’s reasoning is that trial by jury is a fundamental aspect to our system of criminal justice. In its view, it was for the jury to decide whether there were other hypothetical scenarios which could reasonably explain Baden-Clay’s innocence or lack of intent. The High Court noted that Baden-Clay’s representation did not complain about the trial Judge’s directions to the jury to consider other scenarios. The other scenarios which the trial Judge asked from Baden-Clay’s defence were strategically silent on any scenarios where Baden-Clay did kill his wife but he not intend to cause serious injury.

The High Court therefore concluded that the jury’s verdict prevails as the role of the jury, who see the witnesses as they take the stand, is to administer criminal justice as representative of the community. The weight in which a claim that the jury’s verdict was unreasonable is heavy on those who appeal such a decision. The High Court therefore deemed that a court of criminal appeal is no substitute for a jury trial, and the reliance on a hypothetical based on no evidence was not sufficient to render the jury’s verdict unreasonable.

Now that the matter has gone to the highest point of appeal, the spectacle can now be concluded. We hope the decision brings some closure to Allison’s family.