For this year alone, while 1 in every 305 random breath tests (RBT) have tested positive for alcohol, of all those who have undergone mobile drug testing (MDT), 1 in 10 have returned a positive result. In addition, in 2015, illicit drugs were linked to the drivers or riders involved in about 50 road deaths.

The number of mobile drug tests is set to be tripled to 97,000 per year by 2017. Deputy Premier and Minister for Police Troy Grant has warned, ‘If you’re pulled over by Police, it could be for a random breath test for alcohol, a mobile drug test, or both – so don’t be surprised when it happens to you.’ 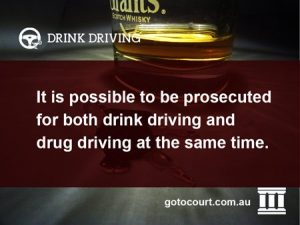 Driving, or attempting to drive, a vehicle while affected by drugs is an offence under the Road Transport Act 2013. If you are convicted of a basic drug-driving offence you may be liable to a penalty of:

Further penalties apply if you refuse to provide a sample when asked to do so.

You can read more about drug-driving offences in New South Wales on our webpage.