On 9 February 2016, the ACT parliament passed the Road Transport Legislation Amendment Bill 2015 (No 2).

While yet to be notified, this new legislation brings with it a number of changes to drink and drug driving laws in the ACT including a significant change to the powers of police to test drivers for alcohol and drug consumption under the Road Transport (Alcohol and Drugs) Act 1977.

Up until now, police have generally been allowed to test drivers for drug or alcohol levels only while they were on a road or road-related area. This meant that if drivers fled the scene of an accident or failed to stop for testing when signalled or requested to do so, the police were powerless to demand breath or blood samples once that driver entered onto private premises, meaning that no charges could be laid or penalties imposed.

The new legislation means that this is no longer the case, and police will now be able to enter onto a premises – residential or commercial – to undertake alcohol and drug testing as required. Minister for Justice, Shane Rattenbury, told ABC News that ‘the community rightly expected that people who drank excessively or used drugs before driving would be detected and removed from the roads’.

The new police power does have its limitations. Officers will only be able to enter premises for the purpose of administering alcohol and/or drug tests if:

Use of force and time limits 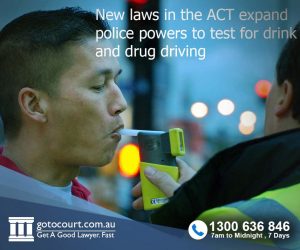 Existing time limits for testing remain in place. For example, police cannot enter a premises to demand a test more than 2 hours after:

In addition, testing is prohibited:

The Bill makes a number of other changes to traffic law in the ACT. The new law:

The ACT is one of the few Australian jurisdictions with human rights legislation (the Human Rights Act 2004 – ‘HRA’). The explanatory notes to this new Bill acknowledge that the new provisions encroach on the freedom of movement (in section 13 HRA), and, in particular, the right to privacy (section 12 HRA).

However, the HRA specifically states that the rights are subject to the ‘reasonable limits set by laws that can be demonstrably justified in a free and democratic society’ (section 28). The circumstances captured by the legislation were argued as falling within this exclusionary provision.

The ACT has seen a number of significant changes to their road safety laws over the past 5 years.

In 2010-11, the government implemented changes which limited the availability of restricted work licences, introduced the immediate licence suspension for anyone over 0.05 BAC, and set the BAC limit for certain licence holders, such as novice and supervisor drivers, to zero.

In 2011, they introduced mandatory awareness education for those convicted of drink and drug driving offences, and in 2013, high range drink drivers became subject to mandatory interlock programs.

Now the government has released its 2016-20 Road Safety Action Plan which sets out 39 points for action in investigating further possible measures to increase road safety in the
ACT. It remains to be seen what will be the outcome of the action plan and what, if any, additional changes will be proposed and implemented as a result of the investigations.