In New South Wales, when a Court determines that a person is guilty of an offence, one of the sentencing options available to the presiding Judge or Magistrate is to have the charges dismissed altogether, or dismissed subject to conditions.  There are three such options regarding dismissal of charges under section 10 of the Crimes (Sentencing Procedure) Act 1999. 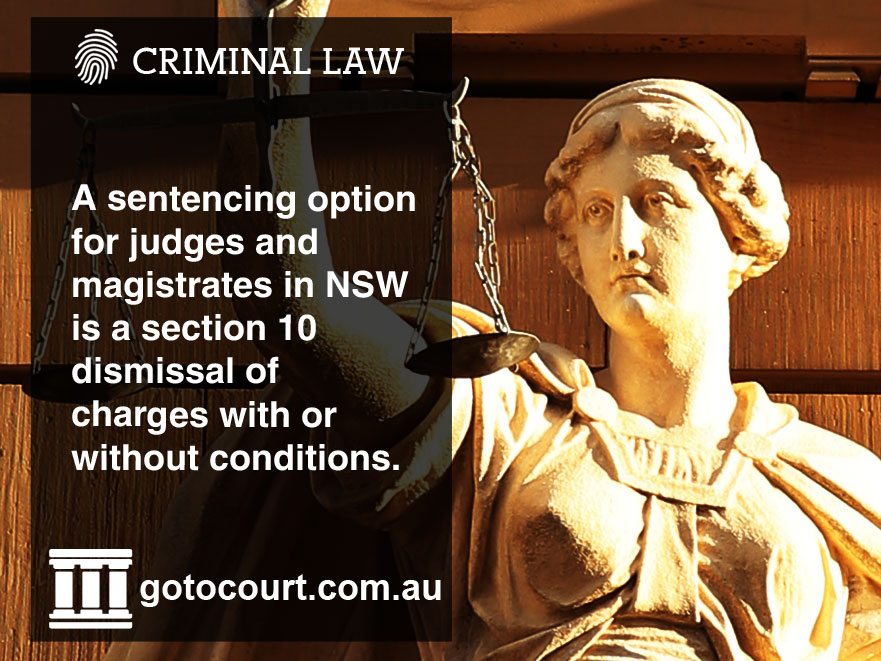 When section 10 Dismissal of Charges may be ordered

If a Court is satisfied that it would not be expedient to punish a person, or if it is satisfied that it would be more expedient to require a defendant to enter into a good behaviour bond, then it may make a section 10 order. In considering whether or not it is expedient to dismiss charges, the Court is required to have regard to a number of factors, including whether or not the offence is of a trivial or minor nature, the offender’s physical and mental health, age, family and social or cultural background, and other matters the Court considers relevant. Participation in intervention programs may be ordered where it appears appropriate to the Court that the offender have the opportunity to be rehabilitated for his or her offence.

The first of the sentencing options is available under section 10(1)(a) of the Crimes (Sentencing Procedure) Act 1999, which allows for the dismissal of the charges, without any further conditions.

This option is only available for very minor or trivial summary offences, for example, minor traffic infringements, drug possession (small amounts for personal use) and breaches of the peace such as drunk and disorderly charges.

The laws regarding good behaviour bonds are contained in Part 8 of the Crimes (Sentencing Procedure) Act 1999.

Discharges conditional on participation in an Intervention Program

Effect of a section 10 dismissal of charges

A section 10 order does not change an offender’s right to appeal the charges on the basis that he or she was not guilty of the offence; in spite of the fact that no conviction or criminal record has been recorded.