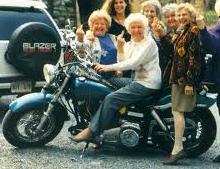 Much has been made of Queensland’s recent so-called ‘”anti-bikie laws”. Whether they will withstand the forthcoming High Court challenge remains to be seen.

However, although that is their main intention, the laws are not specifically targeted at bikies. The legislation is called the Vicious Lawless Association Disestablishment Act 2013 (yes, really!), and ‘association’ is defined to mean any group of three or more persons, whether under the umbrella of a formal entity such as a company or club, or simply ‘associated informally’. This means that, according to the legislation, an ‘association’ is a group of people who are ‘associated’. Even if you are not formally a member of the association, you are deemed to be participating in it’s affairs (and thus subject to the legislation) if you attend more than one meeting or event, or take part in the affairs of the association in any way. It can be seen that these definitions are wide enough to catch anyone who has even the slightest (and possibly totally innocent) connection with the association.

None of these laws have been properly tested in the courts as yet. It remains to be seen if, for example, delivering pizzas to a bikie clubhouse on more than one occasion makes you a participant in the affairs of that gang.

A person is deemed to be a ‘vicious lawless associate’ if the person commits one of the offences listed in the schedule to the Act – there are currently 68 offences listed, mainly covering offences involving violence or drugs, but also including child sexual offences. In theory, this means that if a gang of child abusers are caught, the legislation would apply to them.

The sentences that can be imposed under the Act are severe. If a person is found to be a member of a vicious lawless association, then on top of whatever sentence the court imposes for the offence (which may not necessarily involve imprisonment) the court MUST sentence that person to an additional 15 years in prison, or 25 years if the person is an office–holder of the association.

And so (at least until the High Court makes some sense of the mess), if you want to be absolutely certain that you don’t break the anti-bikie laws: