Most people will have heard of the State Penalties Enforcement Agency (SPER), which is responsible for collecting unpaid fines due to the State of Queensland and various other entities including local authorities. What is often not realised is just what SPER can do to enforce payment.

Fines can be referred to SPER by Court order, or by direction of the body entitled to receive payment. As well as Court fines, those we have seen recently include parking tickets and unpaid toll notices. Many of these items are referred directly to SPER without the intervention of the Courts.

If a fine is not paid, SPER can issue a default notice requiring the debtor to pay within a certain period. At this point, the debtor ideally should contact SPER and make some arrangement to pay the outstanding amount – installment plans are always considered. If the plan is breached, or no arrangement is made, an arrest warrant can be issued. This can provide that the debtor will spend a certain number of days in prison to pay off the amount due. Such warrants are relatively rare.

SPER can also seek a redirection of earnings, which is a direction to an employer to deduct an amount from the debtor’s pay each week to help pay the fine. It can also issue an order for redirection of debt to an entity (such as a bank) that owes the debtor money or holds an account in his name.

What if I ignore SPER demands? 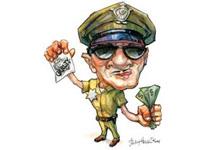 If the debtor simply ignores demands for payment, or defaults under an installment order. SPER can order that his driver’s licence be suspended until payment is made. The suspension is indefinite, but must be reviewed every three months, and lifted when the outstanding amount is paid. Many drivers complain that they never received the notice of suspension but SPER does not have to prove receipt, only that the notice was posted to the driver’s last known address. This, if nothing else, is a powerful argument for ensuring that you notify the Department of Transport that you have changed address!

The maximum penalty for driving with a suspended licence is a fine of (currently) $4400 and/or 1 years’ imprisonment. In addition, even it only imposes a nominal or no other penalty, the Court MUST disqualify the driver from driving for a period of between one and six months. This disqualification is in addition to any continuing SPER fine.