Do I have to vote in the federal election?

[vc_row][vc_column][vc_column_text]2016 has seen the longest election campaign ever held for a federal election in Australia. Though it pales into comparison with the rather painful United States process, by now many voters will be well and truly over the advertising, telephone polling and general electioneering. While the blackout on political advertising commenced at midnight, it is not the time to forget about it yet.

In Australia, unlike many other countries, voting in the federal election is compulsory and has been since 1924. This doesn’t suit everyone – some would argue that it infringes on their freedom to choose and gives a voice to those who are uneducated about the issues or are simply not interested. However, proponents argue that it is the only way to obtain a democratic result, and that it is the duty of citizens to participate in the governance of the country. It might even be argued that it forces people to take an interest.[/vc_column_text][vc_column_text] 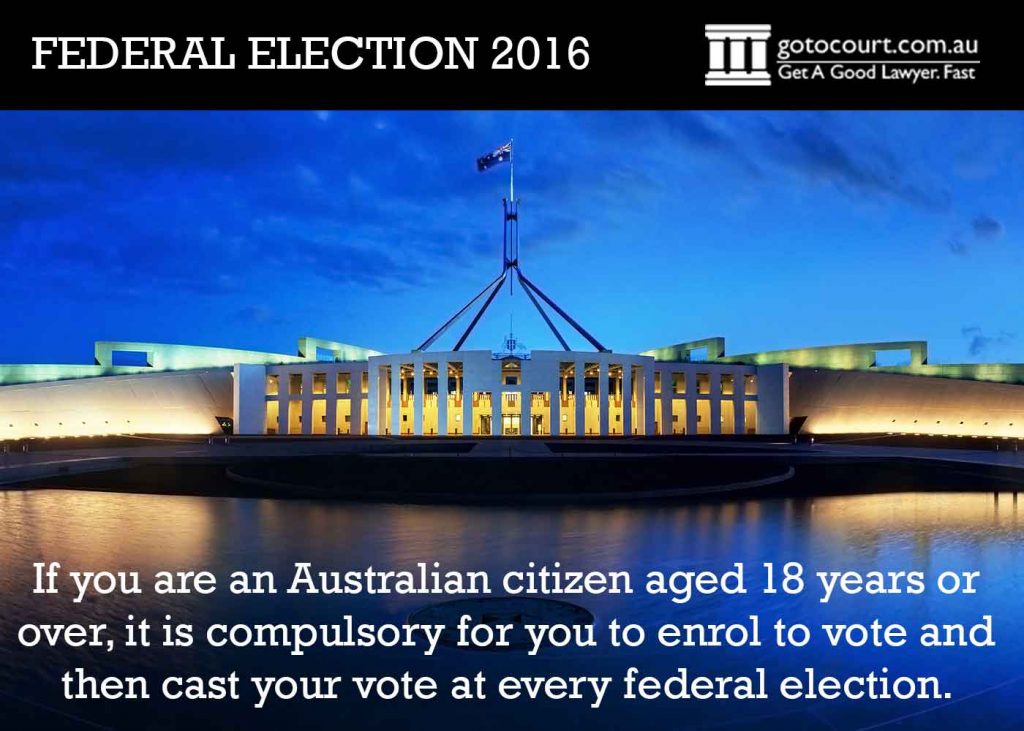 [/vc_column_text][/vc_column][/vc_row][vc_row][vc_column][vc_accordion][vc_accordion_tab title=”What if I don’t vote?”][vc_column_text]If you are on the electoral role (which has been compulsory for Australian citizens 18 years and older since 1912) and you choose not to vote, your forget or simply don’t get around to it, or if you are unable to get to a polling booth, you can expect a letter from the Electoral Commission asking you to explain yourself.

Once you receive the letter, you have 2 options. You can try explaining why you didn’t turn up; however, it will need to be a good excuse and you will need to prove it. If the Electoral Commission accepts your excuse, there is nothing more for you to do. If they don’t, or you choose not to provide an excuse, you have to pay them $20.

Alternatively, you can just ignore the letter. However, if you do so, the matter may be handed to the Magistrates Court. If you are convicted, you will be fined $180 plus court costs and may have a criminal conviction recorded against you.[/vc_column_text][/vc_accordion_tab][vc_accordion_tab title=”What if I haven’t enrolled to vote?”][vc_column_text]If you are an Australian citizen aged 18 years or older and you haven’t yet enrolled to vote, you may be taken to court and can be fined $180.

Although it is far too late to enrol for this election now, you should enrol as soon as you can. You can do so:

If you aren’t sure of your enrolment, you can check it on the Electoral Commission website.[/vc_column_text][/vc_accordion_tab][vc_accordion_tab title=”Are there any exceptions?”][vc_column_text]There are few excuses for not turning up to vote on polling day. Even if you are hospitalised, unless you are actually incapable of casting your vote, the Electoral Commission provides mobile polling at many hospitals.

Every polling booth across the country is rated according to accessibility for those with mobility issues or a disability. Enter your postcode or suburb in the search box on the homepage of the Electoral Commission website, and click on ‘Where can I vote on election day?’. Each option tells you about the accessibility of the polling booth so you can choose one appropriate to your needs.

Alternatively, you can apply to the Electoral Commission to become a ‘General Postal Voter’ so for all elections you will receive your ballot papers by mail. If you have trouble writing, you can get another person to complete and sign a form for you.

For those who are suffering from conditions such as dementia, a relative can apply to have their name removed from the roll. You will need to provide medical evidence of the condition.

Of course, you don’t have to attend if you have already voted by postal vote or have done a pre-poll vote but you need a reason for voting in these ways.[/vc_column_text][/vc_accordion_tab][vc_accordion_tab title=”What if I can’t make it on polling day?”][vc_column_text]If you know ahead of time that you can’t make it on polling day, you can submit a postal vote. It must be completed and returned to the Electoral Commission on or before polling day. You will generally need to find someone to witness your vote. It is too late to apply for a postal vote for this election.

Alternatively, you might be able to do a pre-poll vote prior to election day. You will only qualify for postal or pre-poll voting if you:

If you decide on polling day that you can’t make it, you are back to explaining to the Electoral Commission why you couldn’t attend. It really needs to be a good excuse, or you will have to pay the $20 levy.[/vc_column_text][/vc_accordion_tab][vc_accordion_tab title=”Are there other offences related to voting?”][vc_column_text]You can be charged with a criminal offence if you conduct any kind of fraudulent activity related to voting or the electoral process. For example: