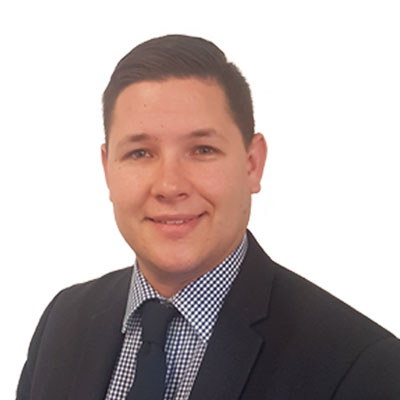 Daniel is a Senior Associate and the Office Manager of our GTC Lawyers Blacktown Office. Daniel holds a Bachelor of Laws and a Bachelor of Arts majoring in Politics from Macquarie University. Daniel was admitted to the Supreme Court of New South Wales as a lawyer after completed his Graduate Diploma of Legal Practice at The College of Law. Daniel was also admitted as a solicitor to the High Court of Australia.

Daniel has a particular interest and expertise in criminal law. Daniel has appeared in the District Court, Local Court and Children’s Court of New South Wales in a variety of complex criminal matters. Daniel is particularly adept at representing clients in drug and domestic violence matters.

Daniel believes firmly in being an honest, driven advocate for his clients and has achieved success both inside and outside the courtroom for his clients. Daniel also has experience in Family Law, Civil Law and Immigration Law.

In his spare time, Daniel loves either watching or playing soccer or enjoying the many fine restaurants Sydney has to offer.

Our solicitor Daniel Shestowsky represented a 44-year-old male at the Liverpool Local Court in relation to allegations of Common Assault and Intimidation as well as an application for an associated Apprehended Domestic Violence Order (ADVO).

The case involved an allegation that our client had assaulted and threatened his 16-year-old daughter. Our client had found out about some of his daughter’s indiscretions and was alleged to have entered her bedroom to discipline her. The police alleged that our client was excessive in his discipline, hitting his daughter with a wooden slat as well as repeatedly threatening that he was going to kill or injure her.

The maximum penalty for Common Assault is two years imprisonment and the maximum penalty for Intimidation is five years. Our client also held a firearms licence and as such, his firearms were confiscated as a result of the creation of an interim ADVO. Our client, despite having no previous criminal history, was facing criminal convictions for each offence as well as a final ADVO which would result in him permanently losing his Firearms Licence.

Our client entered pleas of not guilty and the matter was listed for hearing. Mr Shestowsky made initial attempts to resolve the matter with police but was rebuffed. Mr Shestowsky then appeared with our client on the day of the hearing and had further discussions with police. These discussions proved more fruitful and both charges were withdrawn. These discussions also resulted in the ADVO remaining as an interim order for three months and at the end of this period, being withdrawn and dismissed.

This meant that our client’s Firearms Licence remained suspended only until the ADVO was dismissed, at which time his licence would be reinstated.

This result was achieved by our client having Mr Shestowsky work vigorously and tirelessly in order to obtain the best and most appropriate result for him. Our client ultimately finalised the matter without any criminal conviction and without losing his Firearms Licence, which appeared unthinkable early on in the matter.

Our Senior Associate and Blacktown Office Manager Mr Daniel Shestowsky represented a 20-year-old male at the Penrith Local Court in relation to a charge of Affray that allegedly occurred at the Panthers Leagues Club.

Our client was alleged to have been involved in a brawl in the Poker Machine area of the leagues Club and to have he used unlawful violence towards another person, such as would cause a person of reasonable firmness at the scene to fear for his or her safety.

The maximum penalty for this offence was 10 years imprisonment. Our client faced the prospect of a hearing in the District Court which may have resulted in him being convicted and facing imprisonment.

After Mr Shestowsky’s careful assessment of the evidence, it became clear to our legal team that the client had been acting in self-defence and that no unlawful violence had occurred. After detailed representations were sent to police the charge was ultimately withdrawn before the Hearing date, saving the client both the stress and the cost of a hearing.

This result was achieved by our team carefully analysing the evidence and recognising the existence of a defence which the police could not refute. Our client went from facing full- time imprisonment to having the matter withdrawn and a significant saving in legal fees as well as peace of mind.

This case illustrates the importance of quality representation and closely analysing the facts of each individual case and really highlights the value of lawyers such as our Mr Shestowsky can have on your case.

Our solicitor Daniel Shestowsky represented a 35-year-old man at the Sutherland Local Court on 3 November 2017 in relation to two offences of Destroy/Damage Property and Steal from Dwelling.

The case involved a break and enter at a development site.  Copper wire worth $1,320 was stolen and not recovered.  There was extensive damage to several units on the property, equating to over $30,000.

There were no witnesses, however, during the investigation the police found a DNA spatter on an empty paint can that had been emptied all over the basement of the development site. It matched the client’s DNA.

The client ultimately pleaded not guilty and the matter went to hearing. The prosecution case was circumstantial and we raised reasonable doubt. Our client was found not guilty of both charges.

That result was achieved by preparing the case thoroughly.  We paid careful attention to the evidence that the prosecution had tendered and judiciously formulated our argument to press on the Magistrate the holes in the case. We relied on case law to support the complexities involved in a circumstantial case and we diligently put these before the Court.

This case illustrates the importance of quality representation and the value of a solicitor like Daniel Shestowsky who thoroughly goes through the evidence and the case theory of the Prosecution case in order to put forward the best and most judicious representation of our client.

Our Senior Associate and Blacktown Office Manager Mr Daniel Shestowsky represented a 66-year-old female at the Parramatta Local Court in relation to allegations of fraudulently obtaining over $330,000 from an elderly lady she was caring for.

The case involved an allegation that our client made over 100 transactions over a period of three years using the elderly lady’s bank card and kept the money for herself.  Our client was at the time caring for the lady part-time as she was morbidly obese and could not leave her house without significant help.  The case was widely reported in the news and our client faced intense scrutiny from the media.

The matter was dealt with in the Local Court, meaning the client faced a maximum penalty of imprisonment for 2 years in respect of each charge. The client, if found guilty, would also have been subject to a compensation order, forcing her to pay back all of the $330,000 alleged to have been taken.

After carefully analysing the brief of evidence provided by the police, Mr Shestowsky appeared at the contested hearing at Parramatta Local Court. After careful testing of the Evidence including a thorough cross-examination of the complainant, the client was found not guilty of all charges and the matter was dismissed.

This result was achieved by Mr Shestowski working with a support team of law clerks and our Partner and Accredited Criminal Law Specialist to carefully assess the case against the client and highlight the weaknesses in the prosecution case.

The case was reported in the media both when the charged were laid and when the client was acquitted.

This case illustrates the importance of thorough representation and eye for detail that our lawyers such as Mr Daniel Shestowsky can bring to each and every legal matter.

Our solicitor Daniel Shestowsky represented a 28-year-old man at the Parramatta Local Court on 22 January 2019 on one charge of Stalk/Intimidate With Intent to Cause Fear of Physical Harm.

The case involved an argument that had occurred between our client and his ex-partner centring around their children and who the ex partner was associating with. Our client was alleged to have made detailed threats to kill both his ex-partner and a third party over the phone.

Our client ultimately pleaded not guilty and the matter went to hearing. On the morning of the hearing, our solicitor Daniel Shestowsky negotiated amendments to the police facts with all reference to the threats to the ex-partner removed so that only the threat to the third party remained.

Based on those agreed facts, our client pleaded guilty and Mr Shestowsky made submissions on his behalf. As a result of those facts and submissions, our client received a Conditional Release Order without conviction for a period of 18 months.

This result was achieved by preparing the case thoroughly. Mr Shestowsky paid careful attention to the evidence served and relied on case law to support the arguments put forward in negotiations with police.

This case illustrates the importance of quality representation and the value of a solicitor like Daniel Shestowsky who thoroughly goes through the evidence develops a case theory to secure the best possible outcome for his client.

by P. Smallwood via Google
Daniel Shetowsky was very thorough and professional.He knows what he is talking about. Daniel represented me at Burwood Court today. We got the desired outcome and won our case. First offence Drink Driving low range 0.05. No record or fine. 6 months good behavior bond. Very happy with the result. Thanks Daniel. I would have no hesitation in recommending you.
★★★★★

by Matt H. via Google
Would like to thank Daniel for all his work he has done over the last couple of months, we are so glad he represented us and the outcome was so much better then expected. Highly recommended. Thank you once again.
★★★★★

by Melissa J. via Google
Thank you for working with Joshua and I to achieve a favourable outcome given the start he got off to. We are very pleased with your efforts and would not hesitate to recommend you to anybody in the same situation. All the very best.
★★★★★

by D Cooper via Google
Professional, courteous, diligent and above all patient! Could not fault. Always had my best interests at heart.genuinely felt they were doing their very best to achieve the highest possible outcome for me. A happy customer.
★★★★★