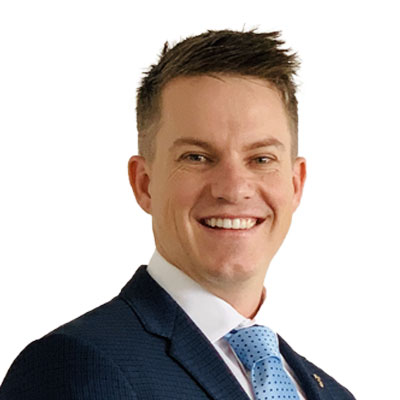 Mark Maloney holds a Bachelor of Laws and an Associate Degree in Policing with Charles Sturt University. He also holds a Graduate Diploma in Legal Practice and is currently studying a Master of Laws while working as a solicitor. Mark was admitted to the Supreme Court of NSW in 2018 and the High Court of Australia in 2019. He has appeared in Supreme, County, District and Magistrates’ Courts.

During his legal studies, Mark was awarded the Central West Law Society Prize for his studies in Professional Legal Conduct and was inducted in the Dean’s List of Academic Excellence in Law for 2017 and 2018 academic years.

Mark has a wealth of practical experience working with the NSW Police, in addition to legal work for a mid-tier commercial law firm and a Newcastle-based criminal law practice. During his time with the NSW Police he was awarded a NSW Government Service medal for work carried out during the June 2007 Newcastle and Central Coast storms.

Mark’s experience has given him a deeper understanding of the problems vulnerable groups face, enabling him to provide more useful practical advice and solutions to his clients.

Mark has a keen interest in fitness and health.

Client Found Not Guilty of Fraud Offence After Contested Hearing

Our Solicitor Mr Mark Maloney recently represented a 40-year-old woman in the New South Wales Local Court. The client had been charged with Dishonestly Obtaining Financial Advantage by Deception.

The client had entered into a contract for service arrangement with the complainant, during which the two parties agreed that the client would carry out numerous tasks associated with running the financial affairs of multiple businesses. The complainant provided her with access to bank accounts so that she could, among other things, pay staff wages, reconcile accounts and generate invoices.

Police alleged that the client had made several fraudulent transactions from these bank accounts over two months – adding up to a significant amount.

During the Hearing of the matter, Mr Maloney scrutinised the evidence of the complainant and of police witnesses.  After considering the material and evidence before the court, the Magistrate found that the prosecution case had not been made out and was not satisfied beyond a reasonable doubt that the client was guilty of the charge.

The successful outcome was achieved by preparing the case thoroughly.  Mr Maloney paid careful attention to the prosecution evidence and judiciously formulated an argument that there were inconsistencies and deficiencies in the prosecution case.

This case illustrates the importance of quality representation and the value of a solicitor like Mark Maloney who undertakes a thorough and evaluative assessment of the evidence before the court so we can put forward the best and most judicious representation for our clients.

Conditional Release Order With No Conviction for Offences Against Police

The client had been consuming alcohol with a group of people in a local hotel.  After showing signs of intoxication, the man was asked to leave the premises by the Licensee.  The man initially refused but eventually left via the back door.  The man and two other people then walked around to the front doors of the hotel and re-entered the premises before being escorted out by security staff.  The man and a co-accused then became involved in a scuffle with security staff before again regaining entry to the premises for a short time until police arrived.

Our Mr Maloney conferenced the matter with the Police Prosecutor.  As a result of these discussions, the charge of Affray was formally withdrawn by the Prosecutor on the first occasion.

For the charges of Resist Arrest, Harass Police Officer and Intimidate Police Officer, the man was placed on a Conditional Release Order (CRO) without conviction for a period of 12 months.

That result was achieved by our Mr Maloney making extensive oral submissions to the court in relation to the same factual foundation being used for the charges of Intimidate Police Officer and Harass Police Officer.  The court took this into consideration on sentence.

This case illustrates the importance of quality representation and the value of a solicitor like Mark Maloney who thoroughly prepares for any sentencing proceeding to secure the best possible outcome for his client.

On 30 October 2019 our solicitor Mark Maloney appeared at Cessnock Local Court on behalf of a client charged with Drive With High Range PCA and Negligent Driving.

Mr Maloney made submissions to the court about the client’s insight into his offending, the level of contrition shown and his pro-active response to rehabilitation, the court imposed a  fine of $2,000 and a disqualification period of nine months for the first offence. It fined the client $500 for the second offence.

This was a great result for our client considering the objective seriousness of his offending.

Our solicitor Mark Maloney recently represented a client on a charge of Indecent Assault Person Under 16 years of age, pursuant to Section 61M(2) of the Crimes Act 1900 (NSW).

The client contested the charge. Mr Maloney succeeded in excluding numerous parts of the prosecution material from evidence. During the hearing, multiple prosecution witnesses were cross-examined and the client’s evidence was ventilated in court.

After considering the material and evidence before the court, His Honour was not satisfied beyond a reasonable doubt that our client was guilty of the charge. The client was acquitted.

by Dominic B. via Google
One of the best Lawyers I've met. Engaging, professional and knowledgeable with a grasp of the technical and legal ethics involved in my case. Flexible payment options( very important for lesser mortals like us!)I will absolutely recommend this lawyer & organisation to my friends and family.
★★★★★

by Jodie K. via Google
I contacted go to court lawyers for a second opinion and was overwhelmed with the help and support I received from the beautiful lady that answered the phone to the lawyer that I met with very highly recommend