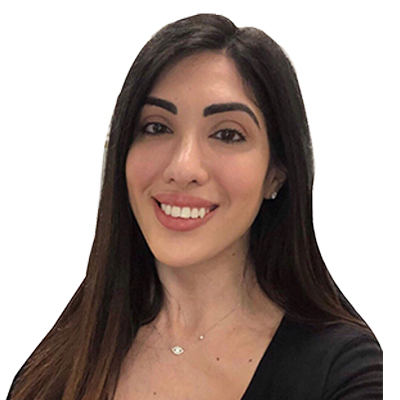 Sarah holds a Bachelor of Laws and a Bachelor of Business and Commerce (majoring in Human Resource Management and Industrial Relations) from Western Sydney University. She has also completed a Graduate Diploma in Legal Practice at the College of Law. Sarah is admitted as a Lawyer in the Supreme Court of New South Wales and in the High Court of Australia.

Sarah gained exposure early in her career to a wide range of legal matters. This allowed her to develop a comprehensive understanding of the legal system for the benefit of her clients. Complimenting her extensive knowledge, Sarah’s compassionate and friendly demeanour outside the courtroom makes her a favourite with clients.
Sarah truly cares about her clients’ needs and believes that great representation starts with thorough preparation of her matters. She is a strong advocate both inside and outside the courtroom who will fight to get her clients the best possible result.

Sarah’s main areas of practice are criminal, traffic and civil law, but she also has experience in Family Law matters. Sarah has appeared regularly in the District Court, Local Court, Federal Circuit Court and tribunals such as NCAT.

In her spare time, Sarah enjoys reading, hiking and spending time with her family and friends.

Mrs Sarah de Szell was able to convince the court that it was more appropriate to dismiss the charges on the condition that the client comply with her treatment plan developed with her health care practitioner. This was a great result for our client who was able to avoid a criminal conviction despite the seriousness of the charges.

This case illustrates the importance of quality representation and closely analysing the facts of each individual case and really highlights the value of lawyers such as our Mrs Sarah de Szell can have on your case.

No Conviction for Drive While Disqualified Repeat Offender

Our solicitor Sarah de Szell represented a 45-year-old male at Mt Druitt Local Court on a charge of Drive Motor Vehicle On Road During Disqualification Period.

Our representation resulted in the client being found guilty of the offence without proceeding to conviction, which meant that he avoided additional time off the road.

That result highlights the importance of having a strong advocate like Mrs de Szell who will ensure that your case is thoroughly prepared and presented favourably to the Magistrate in order to secure the best possible result.

Our solicitor Sarah de Szell represented a 22-year-old male who was facing four charges related to an aggravated break and enter. The client had a prior offence of a similar nature on his criminal record.

Mrs de Szell was able to successfully negotiate with the Office of the Director of Public Prosecutions regarding the four criminal charges and the client was sentenced for only one charge of aggravated break and enter contrary to s111(2) of the Crimes Act 1900. The maximum penalty for this offence is 20 years imprisonment.

At our client’s sentencing in the Penrith District Court, Mrs de Szell argued that although the offence was serious and would ordinarily warrant a full-time custodial sentence, our client had good prospects of rehabilitation despite his prior record.

The Judge accepted Mrs de Szell’s submissions and was persuaded to allow our client to serve his term of imprisonment in the community by way of an Intensive Correction Order for 12 months.

This case illustrates the importance of quality representation and the value of an advocate like Sarah de Szell who will ensure that your personal circumstances are considered by the court.

Our solicitor Sarah de Szell represented a 41-year-old male at Burwood Local Court in relation to driving >30kms over the speed limit.

The client had been detected by police lidar driving >30kms over the limit, an offence which carries a license suspension of three months and a fine.  He had numerous speeding offences on his record.

Mrs de Szell argued that the client required his licence for work and to provide carer services for his father who had a terminal illness. Our representation resulted in the client being found guilty of the offence without proceeding to a conviction, which meant that he was able to keep his licence.

That result was achieved by preparing the case thoroughly and by making persuasive oral submissions, which highlighted the client’s circumstances.

This case illustrates the importance of quality representation and the value of an advocate like Sarah de Szell who will ensure that your subjective factors are emphasised for consideration by the court.

Our solicitor Mrs Sarah de Szell represented a client, aged 40, at Penrith Local Court in relation to a charge of common assault.

The case involved our client engaging in a physical altercation with his neighbour, which was captured on CCTV.

Despite the confronting footage, our solicitor, Mrs Sarah de Szell was able to persuade the Magistrate to dismiss the matter pursuant to Section 10(1)(a) of the Crimes (Sentencing Procedure) Act 1999 (NSW)

This result was achieved by highlighting the particular circumstances of the client including his prior good character.

by Ruth W. via Google
I am extremely happy with the help I received, stressing less and have a direction now.
★★★★★

by Arnold Q. via Google
I would like to congratulate you and GTC Lawyers on professional and efficient conduct and communications throughout your handling of Dads traffic matter, in particular, the extremely well-written Reps and the strategic way in which you represented the matter before the magistrate today.