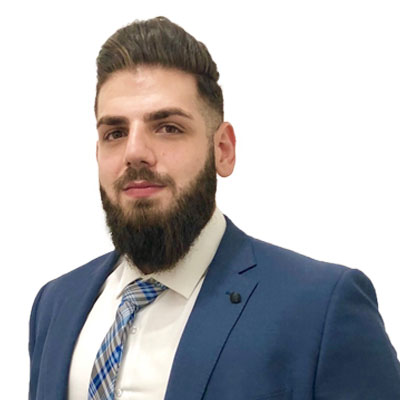 Andy graduated from Griffith University with a double degree in Law and Psychological Science. He was also awarded a Graduate Diploma in Legal Practice by the College of Law and is admitted to practice in Queensland.

Andy has a diverse interest in all areas of law and works to ensure that he understands every component of his clients’ legal issues. He is particularly interested in all aspects of criminal and family law. He also speaks both Arabic and English and is able to meet Arabic-speaking clients to discuss their legal issues in their native tongue.

While studying law Andy demonstrated his dedication to community justice by working at a legal assistance service as a result of which he gained experience in a range of legal disciplines such as criminal law, family law (both parenting and property), and employment law. He also volunteered at a community legal centre.

As a member of the Australian Middle Eastern community, Andy involves himself with his cultural heritage and enjoys spending his free time with his friends and loved ones. He has a strong interest in psychology and human behaviour and is a passionate defender of human rights.

Property Returned in Response to Letter of Demand

Our solicitor Andy Bazzi assisted a client who had engaged us to draft a letter of demand to his ex-partner who had refused to return the client’s belongings to him. The client was in Germany at the time.

Mr Bazzi was able to restore the client’s belongings and have them shipped to him in Europe within two weeks of being engaged.

Client was charged with fraud and stealing. The client was accused of stealing petty cash and attempting to defraud his employer by refunding money used to purchase equipment for the workplace to the client’s own credit card.

After successful case conferencing with the prosecution, both charges were withdrawn, and the client was discharged.

Mr Bazzi made submissions in mitigation of penalty. The client was released on a good behaviour bond, and no conviction was recorded.

Our solicitor Andy Bazzi assisted a client who was charged with unlicensed driving. The client engaged us to contest the charge.

Mr Bazzi prepared submissions to the prosecution highlighting the fact that the client was a temporary resident and the holder of an international license, which permitted him to drive in Australia. After successful case conferencing, the charges were withdrawn and the client was discharged without the need to proceed to trial.

Our solicitor Andy Bazzi assisted a client charged with an assault occasioning bodily harm. The client had carried out an unprovoked attach on the complainant by grabbing the complainant’s head, kneeing him in the head and then punching him several times in the head. The victim sustained soft tissue damage and bruising to the face, throat and chest and abrasions to the shoulder.

Mr Bazzi advised the client to gather some material for sentencing then represented him at a plea of guilty. He made submissions in mitigation of penalty and was able to get a positive result for the client. He received a fine and no conviction was recorded against him.

by Grant Keyser via Google
My lawyer was great, very helpful
★★★★★

by T. Frigene via Google
so far so good. still with them to start/finalise my transition from sponsorship to a PR. very helpful and easy to talk with.
★★★★★

by John P. via Google
Good experience, the lawyer explained things well and put my mind at ease.