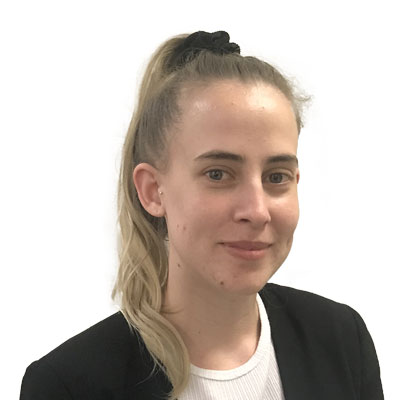 Courtney Ashton holds a Bachelor of Laws and a Bachelor of Criminology and Justice from Edith Cowan University and a Graduate Diploma of Legal Practice from the College of Law. Courtney was admitted to practice law in the Supreme Court of Western Australia on 13 December 2019.

Prior to her admission as a lawyer, Courtney engaged with various law firms as a volunteer and took part in university mooting competitions.

Courtney has broad interests in the law and is not yet settled on an area of practice.

In her spare time, she enjoys spending time with her dog, and with friends and family.

by Andi S. via Google
Open, Honest. I felt so comfortable their presence. Can't recommend enough.
★★★★★

by Brett H. via Google
Very professional. Spoke to me with respect and understanding when I didn't comprehend the information fully.

by J. Smith via Email
My children and I would really like to say a HUGE thank you for everything you have done for us. Like I mentioned, it has been pretty tough on us all, and having someone we could trust was hard to find, so thank you for being that person. I would like to send you something by way of thank you . .  if I send it to your offices, addressed solely to you, will you get it? Thank you again and have a lovely weekend. You have made a positive difference in someone's life - thank you :)
★★★★★

by M. Kapema via Google
Having never been in court before, the experience is something I dreaded, my case was somewhat complicated and dragged until Veenela a new lawyer took on the case. I appreciate the patience and professionalism she provided, on the ball with everything until the matter was settled. I would like to take this time to thank Tony Martin for his time and services. Thanks again Veenela all the best.
★★★★★

by Fran B. via Google
Gilli was good and explained to me exactly what I needed to do to help with my issue. Dealing with legal issues can be stressful and scary, but I felt better after our meeting.
★★★★★

by Modi K. via Google
I had never been involved in any sort of litigation and when threats of such were hurled at me, I panicked. Chad Silver was able to work with me in cordial manner that allowed me to get past my anxiety and formulate an effective solution that in the end paid off. Contrary to popular belief about lawyers, Chad Silver was engaged in helping me despite my limited funds and offered very valuable information.