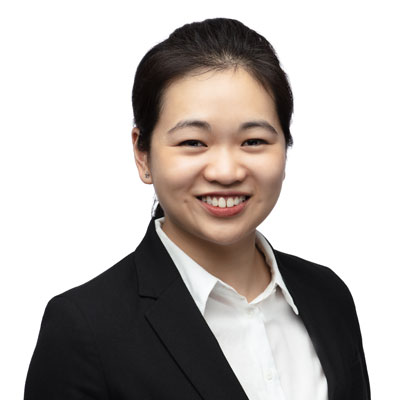 Joanna Fan holds a Bachelor of Laws from the University of Sydney. She was admitted to practice in the Supreme Court of New South Wales in July 2017

Joanna has experience in family law, including property and parenting matters. She is experienced in drafting financial agreements, consent orders and negotiating settlements to achieve beneficial outcomes.

Joanna is invested in finding practical solutions to resolve conflicts. She strives to understand what matters to clients and to provide empathetic advice. Joanna is passionate about helping clients through difficult periods like divorce and separation.

Outside of work, Joanna is interested in languages and music and speaks fluent Mandarin.

Our solicitor Joanna Fan assisted a mother with negotiating property orders for a client where the other party did not have the capacity to make a large lump sum settlement payment.

An application was before the Federal Circuit Court of Australia causing significant stress and financial burden to both parties. The parties had filed their initial court documents and had been unable to resolve the matter through negotiations.

The next step for the parties was to attend a Conciliation Conference or an Interim Hearing. This was going to be a significant expense for the client. The client had not been receiving any spousal maintenance and was in a difficult accommodation situation as she was providing for her adult child.

Assisted by our solicitor Joanna Fan, the parties were able to avoid further court proceedings by settling the matter on a final basis by consent. Instead of providing a lump sum settlement payment upfront, we negotiated for instalment payments that would be made over the next few years. Additionally, an amount of superannuation would be rolled over into our client’s account by way of superannuation split.

This case illustrates the importance of quality representation and the value of a solicitor like Joanna Fan who is able to assist you with negotiating a property settlement to ensure that the effect of the settlement is equitable and practical for both parties. Ms Fan can assist clients with negotiating with the other party to work towards reaching an efficient resolution.

Our solicitor Joanna Fan assisted a mother to negotiate parenting orders for the care of a child whose father was living in a different city. The parties had separated under difficult circumstances which had been distressing for the mother. The mother moved to a different city to be closer to her family and have support with caring for the child.

The father had spent short periods of irregular time with the child after separation and distance was creating difficulties with the parenting arrangement. The father was also working a demanding job which reduced the time he had available to spend with the child.

The parties were able to consider the details of the parenting arrangement to ensure that it was practical for them and for the child. This included specific arrangements for telephone and Skype contact given that the parties were residing in different cities and the child had limited opportunity to spend time with the father.

This case illustrates the importance of quality representation and the value of a solicitor like Joanna Fan who is able to assist you with preparing Consent Orders to formalise a parenting arrangement that is in the best interests of your child.

Overseas Travel Allowed For Child on the Family Law Watchlist

Our solicitor Joanna Fan assisted a young mother in a parenting matter to negotiate with the father to consent to the child travelling overseas.

The parties had been separated for a few months and the mother had planned a holiday with her family to her home country. She planned to take the young child with her as the child had mostly lived with the mother after separation. It was also an opportunity for the child to visit her extended family.

The father had without attempting mediation filed court proceedings and applied for the child’s name to be placed on the Family Law Watchlist. The mother was distressed as her family had already booked tickets to fly overseas and she now could not fly overseas with the child unless further court orders were made.

We attended the first court date and conducted negotiations with the father. The parties were able to come to an agreement regarding the father’s time with the child and also for the child to fly with her mother overseas to see her extended family. The court then made orders for the child’s name to be removed from the Family Law Watchlist.

This case illustrates the importance of quality representation and the value of a solicitor like Joanna Fan who is able to advise you on the steps you can take if your child has been placed on the Family Law Watchlist and you wish to travel with the child. She is able to assist you in negotiating with the other party to work towards a resolution.

The parties had mostly kept their finances separate. However during the relationship the parties had decided to purchase an apartment together. Whilst our client’s former partner had contributed the majority of the deposit, our client had paid half of the mortgage repayments.

As the separation was stressful for the client, she had initially decided to leave the relationship without any settlement. After receiving documents and letters from her former partner’s solicitor, she responded to indicate that she would walk away with only what she owned.

However, after seeking our advice, the client decided to negotiate with her former partner to obtain a settlement sum to reflect her financial contributions during the short relationship.

Following negotiations with the other party’s solicitor, our client was able to reach a settlement with her former partner. She was able to secure a settlement sum which in turn assisted her with supporting herself financially after leaving the relationship

This case illustrates the importance of quality representation and the value of a solicitor like Joanna Fan who is able to advise you on your entitlements after separation and will work hard to ensure that you achieve the best possible outcome from negotiations in an efficient manner.

by N. Numbers via Google
Best money ever spent!!! Never thought I'd say that about a lawyer. Wise and quality information
★★★★★