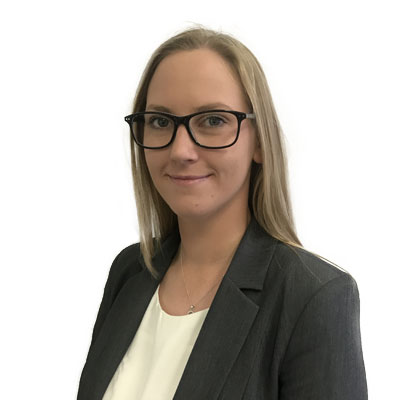 Laura holds a Bachelor of Laws and Bachelor of Arts majoring in psychology from the University of Tasmania. She also holds a Graduate Diploma of Legal Practice from the College of Law and is admitted as a Lawyer to the Supreme Court of Queensland.

Laura began her legal experience through volunteering with the Student Legal Service offering free advice to students, and through a clerkship in the conveyancing team of a law firm in Hobart, where she also assisted with family law matters. She also volunteered at a Prisoner Legal Service assisting other solicitors attempting to obtain parole for eligible inmates.

Laura has a strong focus on family law, criminal and traffic law, although looks to broaden her knowledge into migration and civil law. She takes a friendly and compassionate approach with clients and is dedicated to ensuring that her clients understand the legal process. Laura works hard to achieve the best possible outcome for her clients.

Outside of work, Laura enjoys participating in a variety of sports, including netball, futsal, and swimming. She also volunteers as a Surf Life Saver, and participates in Inflatable Rescue Boat Racing, competing for her local surf club at beaches around Australia.

Probation and No Conviction for Breach Domestic Violence Order

Our solicitor Laura Mitchell represented a client who was charged with contravening a Domestic Violence Order by choking his partner. He engaged us after the matter had been listed for a contested facts hearing by his previous legal representative. We succeeded in negotiating with the prosecution to amend the facts and avoided the need to go to hearing.

At sentencing, the prosecution sought a penalty of nine months imprisonment, wholly suspended. This would have resulted in a criminal conviction automatically being recorded against our client. We submitted that whilst a wholly suspended custodial sentence was within range for the offence according to relevant case law, the court could consider the defendant’s significant mitigating factors and prospects of rehabilitation and order a period of probation instead. This also meant that the court could exercise its discretion as to whether to order a conviction.

The Magistrate sentenced the client to two years’ probation. No criminal conviction was recorded.

Our solicitor Laura Mitchell represented the father in a family law matter, where the mother was withholding the child. We initiated proceedings to seek time with the child. The mother's legal team was unwilling to agree under any circumstances for our client to have overnight time with the child.

After lengthy negotiations, Ms Mitchell was able to convince the mother to agree on time with the father each alternate weekend from Friday to Sunday. This was the arrangement our client had wanted. This agreement avoided the need for the matter to proceed to an interim hearing and orders were handed up by consent.

Our solicitor Laura Mitchell represented a client charged with the indictable offence of Wounding by hitting a victim in the face with a glass bottle. Case law suggests that anyone using glass as weapon should serve actual time in custody, not just a suspended sentence.

Ms Mitchell made detailed submissions about her client's history as a victim of Domestic Violence. Judge noted that ordinarily he should be sentencing her to jail, however in the circumstances presented to the court, he would order a sentence of 18 months imprisonment, with immediate parole.

The client's mother sent us the following message, “thank you for my daughter back, what can I say, have no words. Thank you again”

The client sent Ms Mitchell this message: “I get to go home…thank you so much for everything”

Driving Under the Influence

Our solicitor Laura Mitchell represented a client charged with driving with a  BAC of 0.247. He was facing a licence disqualification period of 12 to 15 months even taking into account his significant mitigating factors.

Ms Mitchell made detailed submissions, recommending rehabilitation courses the client could undertake. The client was sentenced to a fine of $600 and disqualification period of six months. The client sent the following email:

“I just wanted to say thank you for representing my case so well today.  The outcome could have been much worse, as you previously indicated it might, but your presentation of mitigating factors and advice re ‘Time For Change’ program etc contributed immensely.”

Our solicitor Laura Turner assisted the father in a family law matter.

Our client was withholding the children from the mother due to mental health concerns. He  filed an initiating application immediately, so that the courts could become involved and make the decision as to where the children should live whilst the Mother obtained mental health treatment.

A few days after the Initiating Application was filed, the Mother filed a Domestic Violence Application making very serious allegations about the Father.

We adjourned the domestic violence proceedings until the Family Law Proceedings had concluded. We then used the parenting Orders to show that the Mother had agreed to Orders that were contrary to her DV application, and that in our submission, she was not fearful of the Father. We further raised that any domestic violence concerns were not included in negotiations for final orders.

Accordingly, the court ordered the Mother to provide us with certain evidence, and encouraged her to obtain legal advice in relation to ther application. The Mother was unable to provide the evidence, which resulted in her ultimately withdrawing her Application for Protection against our client.

Our solicitor Laura Turner assisted the mother in a parenting matter.

Ms Turner had been unable to contact the other party, and it was apparent that he was not willing to participate in the process, despite being the applicant. To ensure that we could prove that he had been provided a copy of the Orders, we posted him copies of all the emails and orders that we had sent him, which he had claimed not to have received.

The Father did not attend court for the hearing. However, as the court had evidence of our correspondence to him, it was satisfied that he was aware of the court listing and had opted not to appear.

We sucessfully obtained all Orders that were sought by the Mother.

Our solicitor Laura Turner represented the father in a family law matter in the Federal Circuit Court in Brisbane.

Ms Turner conducted an interim hearing on the issue and was successful in obtaining the orders sought by the father.

Our solicitor Laura Turner represented a client charged with possession of cannabis, and possession of property suspected of being proceeds of a drug offence ($1300 cash). She made a written submission to police prosection and provided evidence to support the withdrawal of the proceeds charge. Our client ultimately pleaded guilty to the possession of drugs charge and the proceeds charge with withdrawn by prosecution.

Our solicitor Laura Turner represented a client charged on indictment with nine counts of supplying dangerous drugs, namely methylamphetamine. She was sentenced before the District Court.

The Department of Public Prosecutions sought a head sentence of two years, with the client to serve eight months. Case law suggested that a term of actual imprisonment was within range.

by Anita G. via Google
Laura Mitchell was incredible. With very short notice given she made me feel confident that my case was in good hands. She was very knowledgeable and professional, will definitely recommend her to anyone needing advice or representation.
★★★★★