On 12 November 2015, the federal government introduced into the Senate the Counter-Terrorism Legislation Amendment Bill (No 1) 2015 (the Bill). The Senate referred the Bill to the Parliamentary Joint Committee on Intelligence and Security (the Committee) for investigation and comment, and their report was tabled in Parliament on 15 February 2016.

The Bill proposed a raft of changes to numerous Acts including the Criminal Code Act 1995, the Surveillance Devices Act 2004, the Australian Security Intelligence Organisation Act 1979, and the Telecommunications (Interception and Access) Act 1979. Of most significance, the Bill includes provisions whereby:

In November 2015, the Committee was tasked with reviewing the Bill and reporting back to the Parliament having considered the way in which the new law would operate, and having assessed its efficacy and legitimacy in a largely rights-focussed democratic society.

The Committee has essentially endorsed the Bill, but has also made 21 recommendations which, it says, are ‘aimed at further strengthening the Bill’s safeguards, transparency and oversight mechanisms’.

The difficulty here is, of course, to balance democratic rights and freedoms with measures to protect the community. It is never going to be an easy determination and perhaps only time will tell whether the mechanisms are sufficiently effective without unjustifiably infringing personal liberties.

Many of the Committee’s recommendations were relatively minor and related to technical points. Only the more significant ones are discussed here.

⇒ ‘Best interests’ of a child: This term is very familiar to family law and carries largely the same meaning. Unlike family law, however, the child’s best interests here are not the ‘paramount’ concern. Rather, the paramount concern here is the safety and security of the community.

The Explanatory Memorandum to the Bill states that consideration of a child’s best interests is to be a ‘primary’ consideration when determining whether any restrictions or obligations placed on them are ‘reasonably necessary, and reasonably appropriate and adapted’ to the circumstances. However, this is not made clear in the Bill itself. Consequently, the Committee recommended that it be specifically stated in the legislation so as to avoid doubt.

⇒ Right to legal representation: In the Committee’s opinion, the Bill should expressly provide that a young person has a right to a lawyer during control order proceedings. The Bill contains a provision imposing an obligation on the courts to appoint a lawyer ( a ‘court appointed advocate’) for any person aged 14 to 17 years of age who is facing a control order proceeding. However, it applies only after an interim control order has been made. While a young person is not precluded from obtaining counsel before and during interim proceedings, the Committee argues that the entitlement should be made clear.

A related concern here is that there is no apparent mechanism in place for appointment of the court appointed advocate. It is unclear, for example, how the appointments are to be funded, who is eligible for appointment as an advocate, what precisely will be the advocate’s role, and how far their advocacy responsibilities will extend.

⇒ Special advocates: In Recommendation 5, the Committee argued that legislation should be enacted as soon as possible (by the end of 2016 at the latest) to set up the process and procedure for engaging special advocates for young persons. Even though the Bill provides for court appointed advocates, they, along with the young persons they represent, will be precluded from hearing or obtaining certain ‘sensitive’ evidence which may be made available to the court in their absence.

The Committee recommends that a system of special advocates be implemented to represent the interests of the young person when the court appointed advocate is excluded so as to ‘ameliorate potential unfairness to the subject of a control order proceeding’. Under this scheme, each state and territory would have a panel of barristers and solicitors who have been given security clearance to hear sensitive material issues and who can ensure the young person is adequately protected without divulging the material.

⇒ Due regard to liberty and privacy: It is the Committee’s view that the wording of the Bill should ensure that due regard is had to the liberty and privacy of a person under a control order when the person is being monitored. The Committee holds concerns that the monitoring provisions in the Bill allow too great an imposition on the personal rights and freedoms of those under control orders. They advocate a ‘least interference’ approach to protect these rights and freedoms to the greatest extent possible.

⇒ Fault threshold for advocating genocide: The new offence of advocating genocide does not specify a fault element. While subject to an existing defence in section 80.2D of the Criminal Code 1995 whereby acts done in good faith would be precluded from liability, given that the offence carries a sentence of 7 years imprisonment, the Committee considered that a threshold standard of fault should be imposed so as to capture only deserving cases. The recommendation is that the threshold for liability be set at recklessness.

In addition, the offence as drafted extends only to public advocacy of genocide. The Committee argues liability should extend to private advocacy as well.

⇒ Oversight and reporting: The Bill includes a requirement that the use of particular powers, such as surveillance and monitoring, be overseen by the Commonwealth Ombudsman and reported annually to Parliament. There is, however, some limitation in the reporting mechanism. As it currently stands, some information can be withheld from the Ombudsman and omitted from the parliamentary report if the information could reasonably be expected to make public details of current surveillance activities which might compromise the surveillance.

The Committee acknowledges the risk but recommends that the AFP be required to notify the Ombudsman within 6 months of commencing monitoring, undertaking telecommunications interception, or using surveillance devices. This, in their opinion, would provide a balance between the need for oversight and the risk of compromising covert activities. 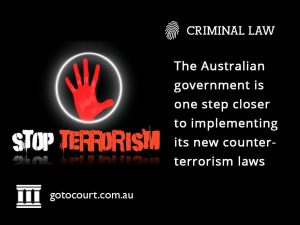 Consequences of the report

Parliamentary Committees carry significant power. In most cases, they are authorised to investigate matters fully, whether by means of a public hearing or inviting written submissions. They may compel particular persons to attend a hearing and answer questions. Those who fail to appear, refuse to answer a question, or lie to the committee, or those who attempt to influence a witness, prevent a witness from giving evidence, or injure or persecute a witness, can be charged with contempt, the penalty for which might involve a reprimand, a fine or imprisonment. Any submissions made to a Parliamentary Committee are, though, protected by privilege so the person making the submission cannot be charged with any offences as a result of anything they say in proceedings, nor can they be sued.

Despite this apparent power, after submitting their report, the government is entitled to accept, in whole or in part, or reject entirely, the recommendations of the report. There is nothing the committee can do to compel compliance with their findings. The only factors likely to sway the government are its agreement with the findings, the balance of power in Parliament and the likelihood of the legislation being passed in a particular form, and the likelihood of an adverse outcome at the next election as a result of their decision.

The government can present their response to a committee’s recommendations directly to Parliament in the form of, for example, a Bill, or an amendment to the existing Bill. In most cases, though, they will table a response to the report. In 2010, the Senate passed a resolution to present their responses to any Parliamentary Committee reports within 6 months of the tabling of the report, although most responses over recent years have been presented within 3 months.

The outcome may also be influenced by the occurrence, between the tabling of the report and the presentation of a Bill to Parliament, of any terrorism-related offences affecting Australia. An attack, or even a thwarted attack, is likely to promote a tougher government stance and broader powers for security agencies.

The difficulty here is, of course, to balance democratic rights and freedoms with measures to protect the community. It is never going to be an easy determination and perhaps only time will tell whether the mechanisms are sufficiently effective without unjustifiably infringing personal liberties.