Driving for Work in Queensland

In Queensland, if your licence is suspended or you are disqualified from driving as a result of drink driving, driving under the influence, or failing to provide a breath or saliva sample to police, you may be able to obtain a restricted driver’s licence or ‘work licence’ to allow you to continue working.

However, you will not be eligible for a restricted licence if you were charged while driving for work, or, as the legislation puts it, while you were ‘engaged in an activity directly connected with [your] means of earning [your] livelihood’.

In addition, if the court has granted you a restricted licence for any reason, you will only be allowed to drive while ‘engaged in an activity directly connected with [your] means of earning [your] livelihood’. If you drive in any other circumstances, you will have breached the terms of your licence and will face significant penalties.

It is important, then, to understand what this phrase means so that you are clear on your rights and obligations as a driver. However, this is not as simple as it might seem.

“The real question is whether the activity was directly, not indirectly, connected with the means of earning.”

What is a restricted licence?

A restricted licence is a form of driver’s licence that, while allowing you to drive, imposes significant restrictions on your driving.

If the court grants you a restricted licence, you may be limited as to what times of the day you may drive, the type of vehicle you may drive, and who you may transport in your vehicle. Primarily, though, you will be restricted to driving for work – that is, you will only be able to drive while ‘engaged in an activity directly connected with [your] means of earning [your] livelihood’.

Despite the significance of this term to drivers, very little guidance exists as to precisely what is meant by this phrase. For example, does it include driving to and from work, or driving to get lunch while on a break from work? If your job involves you being on call, whether for a shift or for 24 hours a day, 7 days a week, is any driving you do while on call sufficiently ‘connected with [your] means of earning [your] living, or are you restricted to driving when you are actually called out?

The legislation does not define the phrase, and many court cases either do not question its meaning, or are unreported, making it difficult to assess with any degree of certainty how it is being interpreted and applied.

The phrase ‘directly connected with’ was considered in the case of R v Ward, Marles and Graham [1989] 1 Qd R 194 in the Queensland Court of Appeal. In that case, the court imposed a ‘substantial connection test’ – that is, whether the driving was substantially connected with the driver’s means of earning a living. Similarly, in Monley v Dunn [1989] QDC 013, Boulton J said, ‘The use of the words “directly connected with” are such as to suggest a substantial connection rather than one which is merely accidental or incidental.’ On this understanding, stopping for fuel or at a service station for repairs on the way to or from work would be acceptable, while stopping at a drive-through liquor outlet (as in Paraone v Fisher [2008] QDC 132) or to pick up groceries is not, even if the stop is directly en route.

In contrast, in the case of Schulze v Commissioner of Police [2011] QDC 275, Devereaux J held that driving to and from work did not amount to driving ‘in connection with’ work. He stated, ‘It seems to me that there is a fundamental difference between driving to work and … any driving … done at work. … The real question is whether the activity was directly, not indirectly, connected with the means of earning. And in my view, driving oneself to work is properly understood as an activity indirectly connected with a means of earning a livelihood.’

Driving for work while on call

Similarly, in relation to those who are on call, whether on shift or available 24 hours a day, in Barton v Bateman [1986] QDC 427, the District Court held that ‘the mere fact that someone has a company car and is on call 24 hours a day does not mean that any driving done is an activity directly connected with the means of earning a living’. This would suggest that any driving that is not as a direct result of being called out would not be sufficiently connected to work to qualify.

Application of the test

It seems, then, that, while the courts agree that the driving must have been substantially connected to the job, their application of the test is inconsistent. Ward is the only one of these cases arising from a superior court (Court of Appeal), but it does not offer much more assistance than the test. Of the others, as the most recent, Schulze probably carries the most weight. Its effect, though, has mixed results depending upon your circumstances.

If, for example, you are caught drink driving or driving under the influence, or if you refuse to provide police with a breath or saliva sample when asked, and you are on your way to or from work, on your lunch break, or on call but not on a call-out, on the basis of Schulze, you should be able to argue that you were not, in fact, driving ‘in connection with’ your work. You would then be able to apply for a restricted licence (though your application might still be rejected for other reasons).

If, on the other hand, you are driving on a restricted licence, on the basis of Schulze, you will not be able to drive yourself to and from work, to and from lunch, or anytime you are on call but not actually called out to a job. This seems overly harsh, as getting to and from work is, in many cases, the primary or even sole purpose of applying for the licence.

To add to the confusion, it appears that the courts have taken the view that this phrase, though in identical terms in the legislation in relation to both eligibility for a restricted licence and as a condition of a restricted licence, carries different meanings in each case. Contrary to the rules of statutory interpretation which dictate that, where identical wording is used in the same piece of legislation, the same meaning must have been intended by the legislature, in the case of Paraone v Fisher [2008] QDC 132, for example, the court held that, while the same phrase is used instances, interpretation of the phrase in one case is, as Dearden J put it, ‘of no assistance’ in interpreting the other. 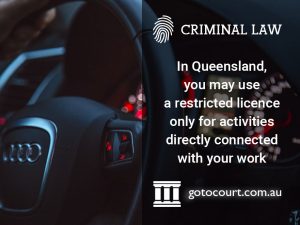 This is clearly unsatisfactory. As a matter of fairness and due process, it is important that this point is clarified. Until then, the only way to be certain you are not penalised is to make sure you do not drive for any reason while you are over the alcohol limit or affected by drugs, and that you comply with police when they request a breath or saliva sample.

What to do next

If you are, or someone you know is, facing a charge related to driving for work or a restricted licence, you should seek legal advice as soon as you can. You can call our Legal Hotline on 1300 636 846 and talk to a lawyer anytime from 7am to midnight, 7 days a week. Your call will be treated with the strictest confidentiality and without judgement.

Should you need a Court lawyer, even at very short notice, the Legal Hotline staff will be able to arrange one for you. You can also request a call back via the website www.gotocourt.com.au and a lawyer will call you back to assess your matter.

This article reflects the state of the law as at 3 February 2016. It is intended to be of a general nature only and does not constitute legal advice. If you require legal assistance, please telephone 1300 636 846 or request a consultation at www.gotocourt.com.au.