Lock Out Laws Passed in Queensland

After a battle to secure sufficient support in Parliament and a vote on the Tackling Alcohol-Fuelled Violence Legislation Amendment Bill 2015 in the early hours of the morning on 18 February 2016, Queensland will soon become subject to ‘lock-out’ laws in an effort to curb alcohol-fuelled violence across the state.

Set to commence in July 2016, the laws mimic, in many ways, those trialled in Newcastle (NSW) in 2008 and those now in effect in and around Sydney’s CBD. Unlike the NSW legislation, Queensland’s lock-out laws will eventually apply state-wide with only a few exceptions.

What the law means for Queensland

The new legislation will mean that, from July, licensed venues such as pubs and clubs will be required to call last drinks by 2:00am. For areas or establishments designated ‘party’ or ‘Safe Night precincts’, the cut-off is 3:00am. High alcohol content and ‘rapid consumption’ drinks such as shots will be prohibited from sale after midnight.

Thanks to a last-minute deal with cross-bench MPs, a 1:00am lock-out for safe night precincts will not take effect until February 2017.

Similarly to NSW, the legislation excludes the state’s casinos and adult entertainment venues from the new rules. Rather, they will be permitted to operate until up to 5:00am, or 2 hours after last drinks.

A review of the effectiveness of the laws is set for July 2018.

The evidence is clear: reduced trading hours leads to reduced violence … Doing nothing is not an option.

Premier Annastacia Palaszczuk justified the lock-out laws on the basis that Queensland would be made safer and lives would be saved. In a joint media release, she said, ‘The evidence is clear: reduced trading hours leads to reduced violence … Doing nothing is not an option’.

Member for Stafford, Dr Anthony Lynham, has been advocating for these kinds of laws for years. Having worked as an oral and maxillofacial surgeon before entering politics, he saw the results of alcohol-fuelled violence on a large scale every day. In the discussion in Parliament prior to passing the legislation, Dr Lynham said, ‘With these laws we will reliably see a one-third reduction in young people turning up in an emergency department on a Friday and Saturday night after assaults. One-third less operations on victims of assaults, one-third less victims of alcohol violence in our intensive care beds, and one-third less parents looking into an empty bedroom.’

The move has won support from, for example, Dr Gavan Palk from the Centre for Accident Research & Road Safety at QUT who described the legislation as ‘long overdue’, and of Queensland Police Union president, Ian Leavers, who described their passing as a ‘great win for policing’. Mr Leavers said, ‘We [the police] witness … the blood baths first-hand. This means we’re going to see less victims, less offenders – the human misery and telling loved ones what’s happened to [a] family member. It also means police will not be the subject [of] these vicious violent attacks’.

Being a minority government, to attract sufficient support to push the Bill through Parliament, the Labor party required cross-bench support. When Independent MP Billy Gordon announced his intention to vote against the legislation, the government’s last chance lay with Katter’s Australian Party (KAP) members, Rob Katter and Shane Knuth. In a last-minute deal, Premier Palaszczuk secured their support, but only after agreeing to meet their demands.

The pair insisted on a number of amendments to the Bill, many minor in effect. One of these builds on previous Safe Night Out legislation in that it inserts an option to ban drug offenders from nightclub or ‘Safe Night’ precincts. Another requirement involves delaying the implementation of the 1:00am lock-outs for venues in Safe Night precincts until 1 February 2017 to allow them time to adjust their practises.

The KAP MPs also required that the government take a serious look at unemployment, and health and safety issues plaguing rural and remote Queensland, particularly in the north-west of the state. With jobless rates sitting at over 15% and limited health care services available, Mr Katter and Mr Knuth argued that something must be done to create work and keep rural communities functioning.

Also on their wish-list was the development of investment opportunities for rural and remote Queensland. Presumably with the decline of mining prospects and prolonged drought decimating agriculture in mind, Mr Katter and Mr Knuth are demanding that the government find a way to draw investment to the bush.

The concessions not directly related to the Bill will be facilitated by holding meetings of the Working Queensland Cabinet Committee in Mt Isa and Charters Towers so that they might gain a better understanding of the issues, and through the prioritisation of mental health programs in the next government budget.

Commenting on their deal, Mr Katter stated, ‘Alcohol-fuelled violence is an important social policy for the government, and the impact of unemployment and the economic downturn are important social policy issues for us.’ Premier Palaszczuk responded, saying, ‘We are committed to curbing alcohol-fuelled violence, but we are also committed to increasing employment and devoting more resources to mental health. … We respect the dignity of work and the Working Queensland Cabinet Committee will focus on opportunities to drive economic growth and employment locally’.

The NSW regime has drawn extensive criticism since its implementation two years ago. The critique ranges anywhere from the encroachment upon fundamental freedoms and the liberty to do as one wishes, to claims that the laws will simply push the violence outside of the affected areas. Some have pointed to the dwindling restaurants, pubs and clubs in the Kings Cross and Sydney CBD areas as evidence that the law is simply bad for the economy.

Reports produced for the government in relation to the effectiveness of the legislation have also come under fire. Comparisons made in pedestrian numbers or foot traffic through affected areas since implementation of the lock out regime are based on different methodologies and research areas, giving a skewed view of what has occurred. In addition, police reporting mechanisms have changed making it much more likely an assault will be categorise as alcohol-related. It has also been alleged that a conflict of interest exists between the financial backers of the primary proponents of the legislation and its outcome.

NSW Premier Mike Baird has been criticised for overstating the reduction in assaults occurring in the lock-out areas. He recently claimed a 60% reduction in alcohol-related violence in Kings Cross and 42% in the CBD. However, according to the director of the NSW Bureau of Crime Statistics and Research (BOSCAR), Don Weatherburn, these figures are higher than can be attributed to the lock-out laws. He stated that the incidence of violence had already begun to decrease prior to their introduction, meaning that some adjustment of the figures was necessary to obtain a more accurate result. While the figures are not as high as Mr Baird indicated, instead sitting around the 40% mark for Kings Cross and 20% for the CBD, Mr Weatherburn concedes that the lock out laws have ‘accelerate[d] the existing downward trend’ in the incidence of violence.

It might, though, be argued that the reduction in incidence could be due to the fact that fewer people are venturing into the designated areas than before, to the extent that long-standing and iconic businesses are closing their doors. Some, such as Sydney Lord Mayor Clover Moore, have voiced concerns that the laws are simply shifting the violence to areas not affected by the lock-out provisions or back into the home. The good news is that, according to Mr Weatherburn, crime statistics do not support that view. 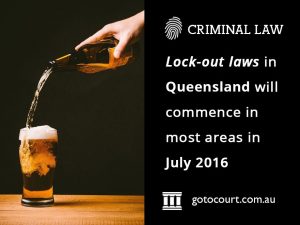 Despite the passion with which Dr Lynham spoke when trying to convince of the need for this lockout legislation, and the acceleration in decline in incidence of alcohol-fuelled violence resulting from the NSW regime, not everybody supports this view. Pushing the Bill through Parliament proved a hard task, with the government having to fight hard to win sufficient support, and with more than half the members of Parliament rising to speak in the lead-up to the vote.

Members of the opposition accused the government of being ‘sanctimonious’. LNP member and shadow Attorney-General Ian Walker argued that, ‘As legislators, emotion is not enough. It’s the head that has to rule when we look at legislation’, while the Member for Currumbin, Jann Stuckey, argued that ‘a “something is better than nothing” attitude will not guarantee the safety of our kids’.

The legislation has also attracted an interesting response from at least one family of the victim of an assault of the kind it seeks to address. Margaret Ford’s son, Sam, was left severely brain damaged after an alcohol-fuelled one-punch attack 6 years ago. Today, he is unable to walk or talk properly, is vision and hearing impaired, and suffers from epilepsy.

According to Ms Ford, though, the new lock-out laws will do nothing to curb the violence. Indeed, Sam’s attack occurred at 10:00pm, well inside the lock out point. Ms Ford said, ‘The people that are going out there and bashing people are people that would bash people anyway, [even] if they weren’t under the influence of alcohol. [The government] should focus more on campaigns and education, rather than putting the money into campaigns for lock out laws’.

On the other side of the argument, though, sits people like Professor Tony Grabs, Director of Trauma at St Vincent’s Hospital, who has described the lock-out laws as a ‘breath of fresh air’, the Hospital having seen a dramatic decrease in the number of people admitted with injuries resulting from alcohol-related violence. Even if this is partially attributable to the lock out laws, surely this must be a good outcome.

The people that are going out there and bashing people are people that would bash people anyway, [even] if they weren’t under the influence of alcohol. [The government] should focus more on campaigns and education, rather than putting the money into campaigns for lock out laws.

It remains to be seen what will be the effect of the lock out laws on the incidence of alcohol-fuelled violence in Queensland. There is good reason, though, to expect the experience will not be much different to that in NSW. It is likely there will be some reduction in violence, though probably as a result of decreased patronage and foot traffic in affected areas, and a significant effect on the local economy.

Unlike NSW, as Queensland’s laws are to extend almost state-wide, concerns as to people simply taking the violence to nearby areas is less likely except in areas close to the border. There is a risk, however, that it will move into the private arena. Consequently, it is vital that the laws are reviewed as planned, and that the data on which any conclusion is based are founded on the same methodology and give an accurate picture of the consequences of implementation.