New Laws for DV in Queensland

A number of high profile incidents of family and domestic violence in Queensland has prompted a government review and a raft of new and proposed legislative and non-legislative changes aimed at its prevention.

In February 2015, a Special Taskforce on Domestic and Family Violence set up by the Queensland Government delivered their report with quite a number of recommendations aimed at preventing such violence. The government has accepted all of the recommendations and plans to implement them in several stages.

The first two stages have already taken effect, and the third is currently before Parliament. This article provides a summary of what these changes mean for Queenslanders. A more detailed discussion of the changes can be found in the article ‘New Domestic Violence Legislation in Queensland’.

The Queensland Government has accepted all recommendations of the Special Taskforce on Domestic and Family Violence and plans to implement them in several stages.

The first stage of legislative amendments designed to help prevent domestic violence in Queensland were given formal assent on 22 October 2015. Some provisions took effect immediately, while others allowed a transitional period and came into effect on 1 December 2015. Many of the changes were technical or procedural, but some were much more substantial. 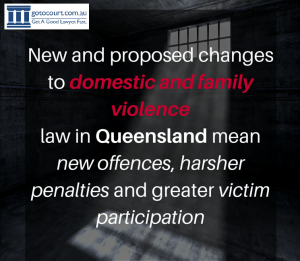 Increased penalties for breach of a domestic violence protection order

Of particular note is the increase in penalties under the Domestic and Family Violence Protection Act 2012  for a breach of a domestic violence protection order.

If, however, the person has committed a domestic violence offence within the previous 5 years and breaches the protection order, the penalty increases from a maximum of over $14,000 or 3 years imprisonment to over $28,000 or 5 years imprisonment.

Another of the changes means that some domestic violence offences are classified as ‘indictable’ and will, in some cases, be heard in a higher court where the more severe penalties (over 3 years imprisonment) can be imposed.

For those cases which go to a hearing, the new legislation has amended the Evidence Act 1977 so that a victim of domestic violence in Queensland is now treated by the court as a ‘special witness’.

This means that, when the victim is testifying against the person who committed a violent offence against them, the court may order that:

The victim may also have another person with them for emotional support.

Domestic violence offences will now also be named as such on the offender’s criminal record or police history. This will make it easier for police and the courts to understand the risk a person presents if another offence is committed at a later date.

Changes to the Domestic and Family Violence Protection Act 2012 which came into effect on 17 December 2015 relate to the way in which a court treats cross-applications for domestic violence protection orders so that the courts might better identify the true aggressor in the relationship.

The changes make it mandatory for a court to consider whether they should impose an ‘ouster’ condition on a protection order – that is, a condition which excludes the violent party from the family home. This condition could previously be imposed, but the court was not obliged to consider it.

The court is also now required to consider victim impact statements in applications for protection orders. No such provision previously existed for the submission of these statements in these proceedings, much less a requirement that the court consider them in determining the conditions for the order.

The changes to legislation relating to domestic violence in Queensland which are due to be considered by Parliament in February 2016 include some procedural matters, but contain some other significant provisions.

Under the proposed changes to the Penalties and Sentences Act 1992, when a person has been convicted of a domestic violence offence and the court is considering an appropriate sentence, the court must treat the domestic element as an aggravating factor unless there are exceptional circumstances.

These exceptional circumstances might include, for example, where the victim in the present case has previously been the perpetrator of domestic violence against the offender, or when a victim of domestic violence kills their abuser in self-preservation in the terms of s 304B of the Criminal Code.

A second significant change, to both the Penalties and Sentences Act 1992 and the Youth Justice Act 1992, is that, prior to sentencing of an offender convicted of a domestic violence offence, both the prosecution and defence now may make a submission to the court as to what the appropriate sentence might be. Currently, only the defence has the opportunity to do so.

Perhaps the most significant change comes in the form of a new offence.

The provision, proposed as s 315A of the Criminal Code, makes it an offence to choke, suffocate or strangle another person without their consent either where that other person is in a domestic relationship with the offender, or where the violence is directed towards a child, relative or associate of the person with whom the offender is in the domestic relationship. The maximum penalty for the offence is 7 years imprisonment. The proposed provision precludes any claim of assault-based defences such as provocation.

Although this kind of conduct is already captured by existing offences, the Special Taskforce considered it necessary to highlight the prevalence of choking and strangulation in domestic violence cases, and the fact that it is often a predictor of an escalation of violence towards the victim.

The report of the Special Taskforce sets out many other legislative recommendations that are yet to be put to Parliament. It also contains a number of non-legislative approaches that are likely to be rolled out over time.

One recommendation that has been flagged for implementation would require police who respond to an incident of domestic violence in Queensland to assist women and children to remain in the family home – as long as it is safe to do so – and to encourage those who provide crisis accommodation to take in perpetrators of domestic violence rather than victims.