Fittingly, on the International Day for the Abolition of Slavery, the Australian Freedom Network (AFN) has been launched in Canberra. Its goal is to find practical ways to free people who are effectively enslaved in Australia.

According to their website, the ‘Global Slavery Index estimates 35.8 million people are enslaved globally with 3,000 people estimated to be enslaved in Australia.’ However, this is, in the words of the Commissioner of the Salvation Army Eastern Territory, James Condon, only the ‘the tip of the iceberg’.

It is estimated that 35.8 million people are enslaved globally and approximately 3,000 enslaved in Australia.

A person is said to be held in slavery if: 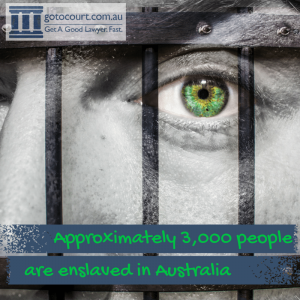 Slavery in Australia has been found to exist across a variety of occupations including agriculture, clothing manufacture, domestic labour, and the sex trade. In one case, a young woman was lured to Australia from the Philippines, the object of which was suspected to have been for the purpose of organ harvesting.

The AFN was inspired by the Global Freedom Network launched 1 year ago by Pope Francis. It draws together a diversity of faiths in the hope of inspiring those in the faith communities to act to bring slavery to an end. The Joint Declaration is available online for anyone to sign.

You can find more information about slavery and human trafficking in Australia on our website, and on the University of Queensland website.