Drones, also known as Remotely Piloted Aircraft (RPAs) or Unmanned Aerial Vehicles (UAVs) first drew attention when they were used during the war in Afghanistan. But drones are becoming smaller, lighter and cheaper – you might know someone who owns a drone.

In 2015, Amazon successfully delivered its first products by drone delivery. This means that soon a drone may be a household device as common as the TV and the smartphone.

You have probably already heard the whining noise of a drone in your neighbourhood. It might have been in your street or at a nearby park. Seeing it zip past overhead might be a bit of a novelty but what happens if a drone buzzes around your house for hours while you are trying to sleep?

Almost all drone models come fitted with cameras, enabling you to see where the drone is flying. Higher priced models even come with video and audio recorders. What are your options if one records you sunbathing in your backyard?

Like most technology, the law has not quite caught up with drones yet:

All this means is that personal rights and drones continue to be a complex legal area. 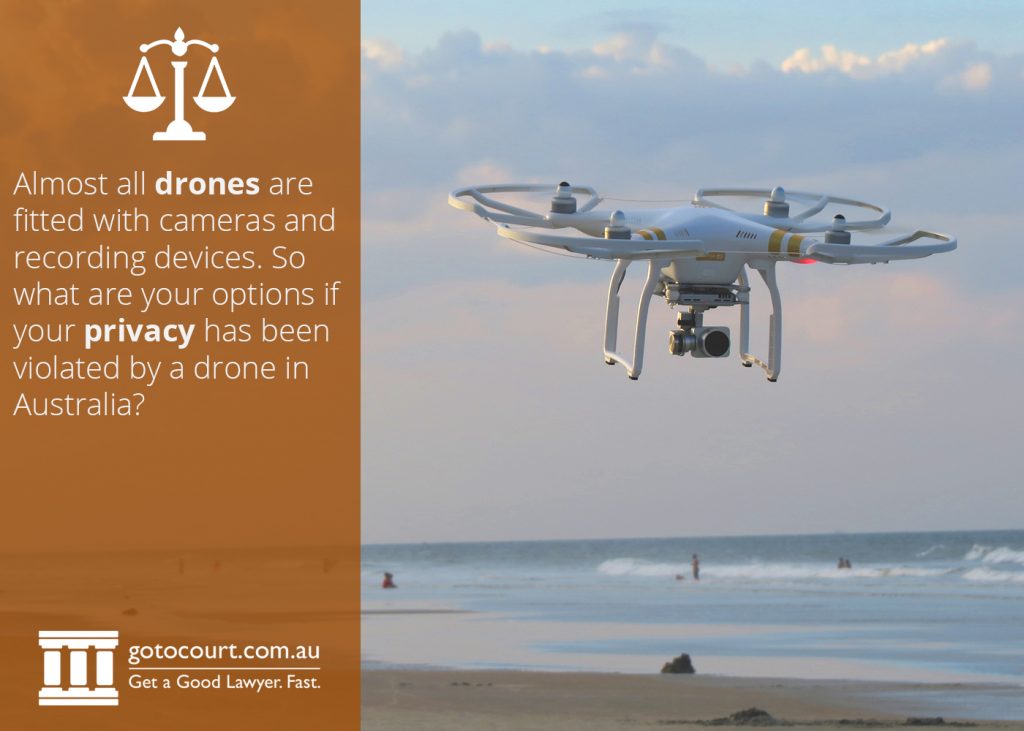 This means that the usual legal protections of your privacy do not apply to small businesses, media or private individuals.

The second thing is that although they might be a regulator, CASA do not regulate drones that invade privacy. CASA enforces safety rules. They might take action if a drone is piloted in any of the following ways:

But what are your options if you feel that your privacy has been breached by a drone? There are other ways the law can provide protection.

Some actions by drone operators can be considered criminal offences. For example, in Queensland it is illegal to record somebody without their consent if they are in a private place or conducting a private act.

A private act can include showering, going to the toilet, having sexual intercourse or getting dressed. It is also illegal to record somebody in a public place where privacy might be reasonably be expected, such as the change rooms of a public swimming pool.

The possession, sale or supply of any of these drone recordings would also be illegal. If the drone recorded audio that falls within certain categories, it can also be a breach of laws against the use of listening or surveillance devices.

Most other states and territories have similar laws protecting private places and unlawful surveillance, and this behaviour can result in significant penalties. Penalties include hefty fines and time in prison.

The use of surveillance devices by police is also heavily regulated and involves obtaining a warrant or similar document (usually from a judge).

It is also possible for a drone flight over or around your house to become an issue of trespass. Unlike other types of civil disputes or torts, a trespass is available without having to demonstrate you suffered any loss or damage as a result of any action by either the drone or its operator.

A trespass involves an interference with your rights to ‘private enjoyment’ to land (which includes your house and the land around it, like a backyard or acreage). To prove a trespass you have to be able to prove the following:

Defences for drone use

Several defences to trespass can be available for drone operators. The first of these is that you consented to the intrusion. Although, this is probably unlikely, unless the drone is delivering something you ordered.

Further, although most people have what is called ‘implicit consent’ to walk up to your front door and knock on it, it is unlikely this would apply to a drone as the drone is not a person.

The other defence to trespass is what is known as ‘lawful authority’.

Police are able to use surveillance devices as part of their investigating crimes. However, these usually require a warrant in your State or Territory. It is a little unclear whether this would cover the use of a drone, but if it did, it is probably unlikely the police drone would be flying so close to your house that you notice it as this would defeat the point of surveillance!

What is more worrying is that security guards, private investigators (also called inquiry agents in some states) and debt collectors might be able to use drones. This is because it is legally possible in some states and territories for these people to surveil you in a public place. Obviously this would not include your bedroom or bathroom, but again the law is a pretty big grey area here.

If the photographs or footage from a drone flight were to be released or posted online (such as on Facebook, Instagram or Snapchat) without your consent, this would be a breach of your privacy. If it is also connected with some statement about you that is untrue, you might be able to sue for defamation.

To prove defamation, you would need to show the following:

Just like a trespass action, a defamation action can be very expensive and time consuming. If you were to be successful, you might be awarded damages or compensation, and the court will more than likely also order the person not to fly their drone around your property.

The first thing to remember is that you should report any unsafe drone activity to either the police or CASA. CASA have an email reporting system for unsafe operations of drones available here.

You should remember, though, that this is only for safety complaints – CASA will not investigate breaches of privacy.

If you are able to identify the pilot of the drone you may be able to speak to them directly and voice your concerns. This may be the cheapest and efficient way to deal with the dispute. Alternately you can send them a ‘letter of demand’, asking that they stop flying over your property and making it clear you do not consent to their conduct.

If these fail you should seek legal advice about what options might be available.