Listening devices in Queensland are regulated by the Invasion of Privacy Act 1971 (QLD). Section 4 of the Act defines a listening device as any form of instrument, apparatus or equipment capable of being used to listen to, monitor, overhear, or record a private conversation.

You may be picturing a James-Bond-style ‘bug’ or surveillance equipment used by police agencies, but the definition is broad enough to include your landline or mobile phone.

In most cases, it is an offence for a person to use a listening device to listen to, monitor, overhear, or record a private conversation which they were not a party.

Example 2: X attends a café where Y and Z are having their meeting. X is not a party to the meeting or conversation, but sits next to Y and Z without them noticing. X receives a call from Q who is simply checking the time X intends to arrive home. Q can hear the conversation between Y and Z in the background. Q has no idea who Y and Z are. In this situation, neither X nor Q have committed an offence as X broadcasting and Q hearing the conversation between Y and Z was unintentional. 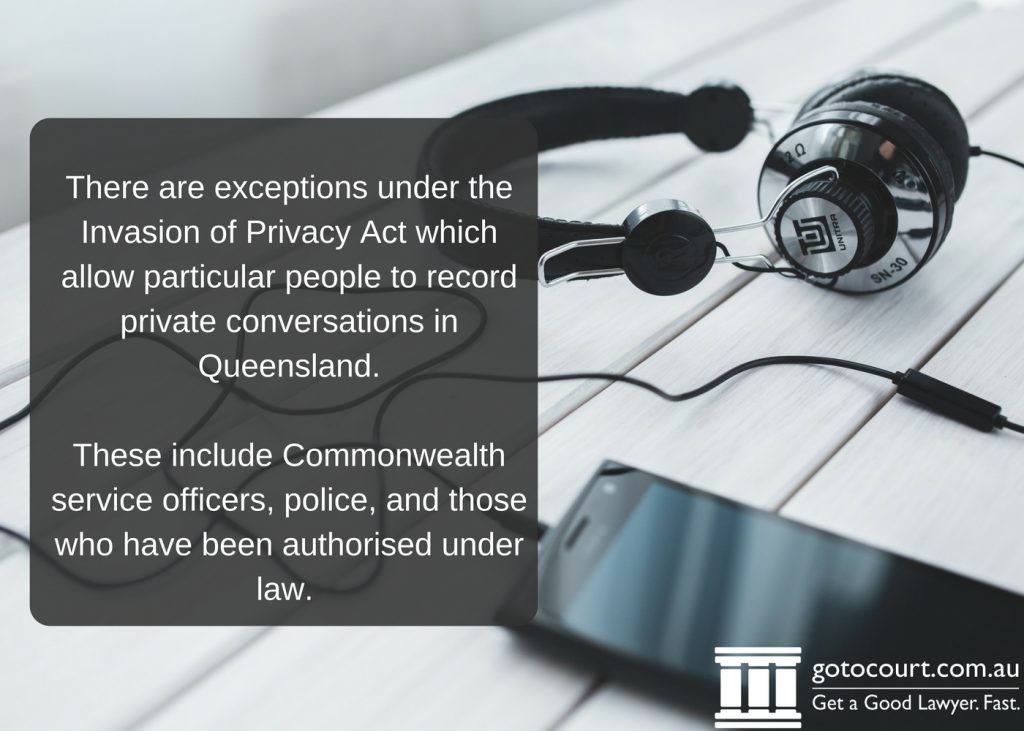 You cannot publish the recording. Publishing includes playing, reproducing or copying the recording, unless everyone involved in the conversation consents.

When a conversation has been recorded, whether lawfully or not, it is generally an offence to publish or share the conversation to a third party. There are exceptions to this general rule.

It is not an offence to publish or share a conversation recorded on a listening device in Queensland if the publication was:

Recordings on listening devices as evidence in court

People often secretly record a private conversation in order to gather evidence for a legal claim.

As long as the recording was not obtained unlawfully and the person recording it was a party to the conversation, it is usually admissible evidence in either civil or criminal proceedings.

A person who unlawfully uses a listening device to listen to, monitor, overhear, or record a private conversation faces a penalty of up to 40 penalty units (currently $4,712) or two years in prison.

A person who lawfully uses a listening device to listen to, monitor, overhear, or record a private conversation and then communicates or publishes the conversation unlawfully faces a possible penalty of 40 penalty units (currently $4,712) or up to two years in prison.