There are a number of fraud related offences in the Northern Territory, with the key offence being criminal deception under section 227 of the Criminal Code Act 1983.

There are two elements of this offence.  A person is guilty of criminal deception if they:

A person who is guilty of criminal deception in the NT is subject to the same punishment they would have received if they had stolen the property or benefit.   The punishment for fraud in the NT is seven years’ imprisonment.

Obtaining property or a benefit

Both ‘property’ and ‘benefit’ are given broad legal definitions. Property is defined under section 1 of the Criminal Code Act 1983 as meaning anything that can be capable of being owned. It includes anything animate (alive) or inanimate. Benefit is defined under section 227(1A) and includes rights, entitlements and any advantage.  Unlike some other jurisdictions, benefit is not strictly limited to a financial benefit.

Deception is defined in section 1 of the Criminal Code Act 1983 as an intentional act of deception through words or actions as to a fact or law.  It essentially means encouraging somebody to believe something which is false is actually true.

The NT definition is more narrow than other jurisdictions as it requires the accused to intentionally deceive, rather than simply being reckless with the truth. That is, the accused must actually know or believe their words or conduct are false and must have intended to deceive another person.  A deception may include the accused deceiving somebody about the motivations of the accused.

The accused must obtain the property or benefit because of the deception.  There must be a causal link between the two.  If, for example, the victim knows that the accused is lying to them, they will not have been deceived and the offence will therefore not have been committed.

Unlike other jurisdictions, there is no separate and additional requirement that the accused be dishonest in the Northern Territory.  While it will usually be the case that an accused person who intentionally deceives another will also be acting dishonestly, there may also be examples when this does not necessarily occur.   For example, an accused who believes that they are the true owner of the property may intentionally deceive somebody to get the property back but may not be acting with any underlying dishonesty as they believe that they have a legal claim to that property.  It is the presence of the intentional deception that is the crucial element of this offence in the NT and this is all that is required to establish the fault element for criminal deception. 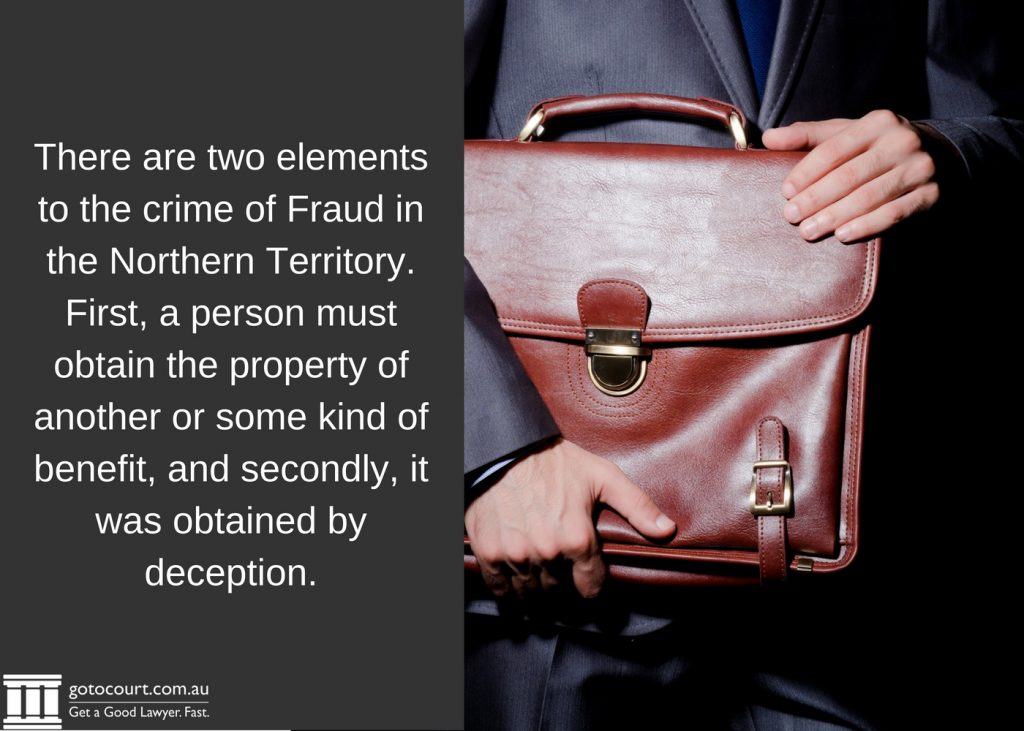 Specific additional offences relating to fraud in the Northern Territory

Both of these offences attract a maximum penalty of seven years’ imprisonment.

Obtaining credit by deception makes it an offence to use any deception to obtain credit or further credit for yourself or somebody else.  Credit is defined broadly in section 1 to effectively include credit with respect to the repayment or payment of money as well as obtaining a service, goods, and performance of any obligation regardless of whether it is legally enforceable.

Inducing a person to engage in conduct by deception makes it an offence to use deception to induce a person to do something which will result in a gain for yourself or another. A gain in this context may be permanent or temporary and is defined to include keeping something you already have. This has the potential to be a really broad offence.  It does not require anybody to show that the accused actually gained anything.  All that has to be shown is that the deception was intended to result in a gain.