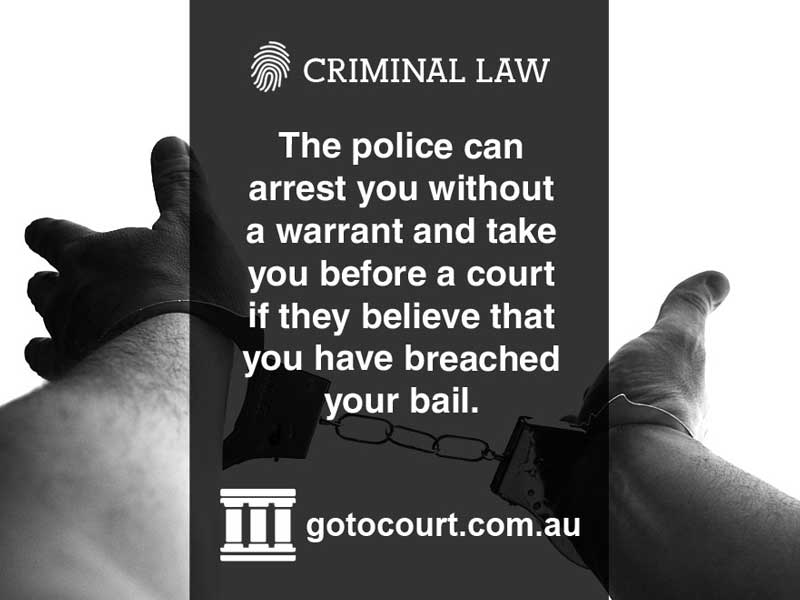 In the Northern Territory the maximum penalty for breaching your bail is a fine of up to $30,600.00 or imprisonment for 2 years. You are not guilty of the charge of breaching your bail if you can prove that you had a reasonable excuse for the conduct that made up the breach or for failing to come to court. The penalty that the court gives you for the bail offence cannot be more than the maximum penalty that it can give for the offence that you are on bail for. Court proceedings for breaching bail may be commenced at any time. If the bail is for a matter that is in the Supreme Court or Court of Criminal Appeal then the breach proceedings are heard in the Supreme Court. Otherwise they are heard by the court that you are bailed to appear in.

The police can arrest you without a warrant and take you before a court if they believe that you either have or are about to breach your bail undertaking. They must do this as soon as is practicable. A magistrate or justice can also issue a warrant to arrest you and bring you to court for failing to appear in court or for breaching your bail. A summons to come to court can also be issued for a breach of bail. The court may release you on your original bail or it may revoke your bail. If the court finds that you did breach the bail undertaking or a condition of your bail and the offence you are on bail for is a serious violence offence or an offence that has a presumption against bail it must revoke your bail. If the court revokes the bail, it may grant you bail again, or it may refuse you bail and put you into custody.

If you don’t comply with your bail undertaking or a bail condition and you or a surety has entered an agreement under the bail to forfeit an amount of money, the court may order that the amount is forfeited and paid to the Territory. If security or an amount of money has been deposited, a court may order that it goes towards payment of the amount ordered to be forfeited. If a court makes an order it may, on application reduce the amount of the forfeiture, or confirm, rescind or suspend its order. The amount may be referred to the Fine Recovery Unit and recovered as if it were a fine imposed by the court. The court may also order that, if the amount is not paid within 28 days, you are to be imprisoned until your liability is discharged. The time in custody is calculated at the rate of $306.00 per day until the amount left unpaid is discharged. The time served cannot be less than one day or more than 3 months.