The legal procedure used by a creditor to reclaim money which is due and payable by a debtor is known as debt recovery in the NT (Northern Territory).

What to do before starting proceedings 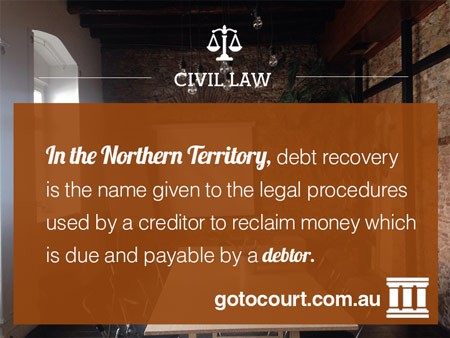 If a debt is owing to you, you should first send a letter of demand to the debtor before starting proceedings. The letter must contain details about how the debt arose, when it was due, and a deadline for payment. It must stipulate that the consequences of failing to pay the debt includes that the creditor will commence legal proceedings.

The debt owing to you might be too small to be worth starting proceedings, and so it is recommended that you attempt to negotiate with the debtor. The debtor may be able to afford to pay you without you having to start proceedings, or they may have a problem with a service you provided them that has stopped them from paying you. You should make sure that any settlement is put into writing.

The local courts or tribunals in each of the States and Territories have a small claims division in which an individual or a company can start proceedings to recover small debts. The rules for commencing proceedings in the Small Claims Division of the Local Court in the NT are contained in the Small Claims Act. A ‘small claim’ is a claim for an amount of $10,000 or less.

Starting proceedings in the Small Claims Division of the Local Court

Claims for debt recovery in the NT are commenced in the Small Claims Division by filing a statement of claim. The filing fee is $117. If you are the person starting the proceedings, you must then serve the prospective defendant with the statement of claim and a Notice form. The defendant can either file and serve on you:

If you are served with an ‘Offer to Pay’, you can accept it by filing a ‘Notice Accepting Offer to Pay’ form with the court.

The procedure for debt recovery in the NT in the Small Claims Division is designed to be less formal than the higher Courts. Hearings are generally open to the public unless the Local Court orders otherwise. You can be represented by a lawyer if you choose to be.

The Local Court is not bound by the rules of evidence, and an investigator may be appointed to investigate any issues of fact. If you commenced the claim, you should bring evidence such as receipts and any contract you had with the defendant to support your claim. You can also have witnesses present evidence at the hearing or, if they cannot attend on the day, you can lodge written witness statements.

The following orders may then be made by the Local Court:

If the hearing is held by a registrar, the plaintiff or the defendant can apply to the Local Court to hear an appeal. A request for such an appeal must generally be made within 14 days of the registrar making orders. If the hearing was held by a magistrate, then the plaintiff or defendant can apply to the Supreme Court to hear an appeal, but only if the decision of the magistrate was wrong on a question of law or the conduct of the proceedings was unfair.

For claims for debt recovery in the NT that are greater than $10,000 but less than $100,000, you can start proceedings in the Local Court under its general civil jurisdiction and rules. Forms for commencing proceedings are available on the website for the Local Court.

For claims that are greater than $100,000, you can start proceedings in the Supreme Court.