A franchise agreement is an agreement under which one party (the ‘franchisor’) grants the other party (the ‘franchisee’) the right to carry on a business using a licensed trade mark and trade name, and often a marketing plan or operating system that is determined by the franchisor. Well known franchises in Australia include Subway, McDonald’s and IGA. 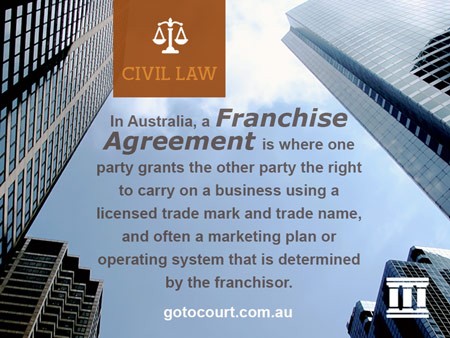 When the Franchising Code of Conduct applies

Changes made by the Franchising Code of Conduct

Contents of the Franchising Code of Conduct

This requirement is in addition to the requirement to provide a short information sheet mentioned under the heading ‘Changes made by the Franchising Code of Conduct’.

The Franchising Code of Conduct provides for certain conditions relating to franchise agreements. For example, the franchisee is entitled to a seven day cooling-off period after entering into a new (but not a renewed or existing) franchise agreement.

If the agreement is terminated during that cooling-off period, the franchisor must repay any payments made by the franchisee or face a civil penalty of 300 penalty units (i.e. $51,000).

Disputes that arise under franchise agreements may be dealt with in two ways. Firstly, the Franchising Code of Conduct requires every franchise agreement to include a minimum standard mediation procedure for resolving disputes. A condition of that procedure is that the parties must attend mediation (if the parties cannot resolve it themselves and refer the matter to mediation), or face a civil penalty of 300 penalty units (i.e. $51,000).

The Franchising Code of Conduct also provides for a more comprehensive mediation procedure that is not required to be included in a franchise agreement.

Failing to apply with the Franchising Code of Conduct

The Franchising Code of Conduct is a mandatory industry code. This means franchisors must comply with it.

If a corporation breaches the Franchising Code of Conduct, the ACCC will investigate the breach. Following an investigation, the ACCC could issue the breaching franchisor with an infringement notice (in which case, a fine of $8,500 is payable) and the matter is treated as settled.

The ACCC may also initiate court proceedings if the franchisor breached a civil penalty provision in the Franchising Code of Conduct. An individual, or the ACCC, may seek an injunction in order to prevent further breaches, or to seek compensation and damages.

Other Commonwealth and State law obligations

Franchisors are also subject to other provisions of the Competition and Consumer Act 2010 (Cth), including the Australian Consumer Law rules. For example, a franchisor cannot engage in misleading or deceptive conduct or unconscionable conduct when negotiating a franchise agreement.

The remedy for such actions depends on the offence. For example, if a corporate franchisor makes false or misleading representations about its franchise, a maximum fine of $1.1 million may apply.

Court action can also be commenced against a franchisor breaching the Australian Consumer Law rules for compensation and damages.

If a person enters into a franchise agreement to operate a business, and they are required to be licensed under the Property, Stock and Business Agents Act 2002 (NSW) in order to carry on that business (e.g. real estate agents and strata managing agents), they must notify the Department of Fair Trading within 30 days of entering into the franchise agreement. Failure to do so is subject to a maximum penalty of 100 penalty units (i.e. $11,000).

Franchisors are also under an obligation to inform the Department of Fair Trading if a franchisee fails to account for any money under the agreement. Failure to do so is also subject to a maximum penalty of 100 penalty units (i.e. $11,000).

Furthermore, franchisors are made jointly and severally liable with franchisees in a number of circumstances; for example, if the estate agent commits any theft, embezzlement or fraudulently misappropriates money, or liabilities that arise out of a franchisees’ negligence.

Unlike NSW and Victoria, South Australia does not have specific rules for the registration of certain franchise agreements.

In Western Australia, under the Real Estate and Business Agents Act 1978 (WA), real estate agents and business agents cannot carry on business under a franchise agreement without government approval. If they do so, all parties under the franchise agreement commit an offence with a maximum fine of $10,000. If approval is given, the franchisor and franchisee are both liable for penalties if the franchisee fails to comply with certain trust account obligations and any criminal or fraudulent conduct by the franchisee which results in another person losing property.

The Australian Consumer Law rules are enforced in Western Australia under the Fair Trading Act 2010 (WA) by the Department of Commerce Consumer Protection division.

The Australian Consumer Law is enforced in Queensland by the Office of Fair Trading.

Separately, the Australian Consumer Law is enforced in Tasmania by Consumer Affairs and Fair Trading.