In recent years, police across Australia have been given increased powers with respect to the investigation of those driving offences which are colloquially known as hooning, and have implemented various hoon laws. Hooning is anti-social and dangerous driving behaviour, ranging from doing burnouts and doughnuts to more serious offences such as evading police by speeding in excess of 45 kilometres per hour above the speed limit.

In order to eliminate hoon behaviour quickly and improve safety to other road users, all States and Territories have amended traffic legislation to include offences related to hoon behaviour and to allow for the impounding or confiscation of vehicles which are suspected to be involved in the commission of a hooning offence.

The periods of impoundment, and the penalties for the offences, differ from State to State and depending on whether the offender has been previously convicted of a hooning offence. 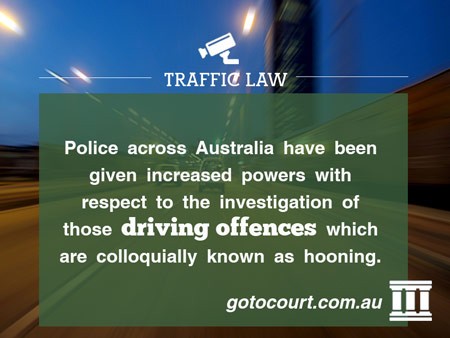 In most States and Territories, speeding in excess of 45 kilometres per hour above the speed limit will count as “reckless driving” and will result in immediate impounding of a vehicle.  Reckless driving, menacing driving, careless driving and dangerous driving are all variations of driving offences which show complete disregard for other road users, putting their safety at risk.  It is also an offence in all States and Territories to drive in a reckless manner in order to evade a police pursuit.

Participating in, organising, or observing speed trials or drag races without a permit is also an offence across the States.  Drivers are therefore not the only people who can be charged with this offence; people who tag along for fun and to watch may also be charged with a hooning offence.

Driving in a manner which deliberately causes a vehicle to lose traction, or causes smoke when the tyres come into contact with the surface, is also an offence.  This is commonly known as doing doughnuts or doing burnouts.

Impounding is when a vehicle is seized and taken to a particular impounding location for storage, often with clamps on the wheels and an immobilising device.  For many hoon offences, vehicles may be clamped and/or impounded immediately.  The period of impoundment varies from State to State, but is most frequently around 28 days.

If a vehicle has been stolen, is involved in a hooning offence and is then impounded, the registered owner of the vehicle may apply to have the vehicle released from impoundment.

Where an offender repeatedly flouts anti-hoon laws and is found guilty of a hooning offence on two or more occasions, the offender may face having the vehicle permanently confiscated.  This is known in some States as confiscation, and others as forfeiture.  This means the vehicle becomes the property of the State and can be sold.

Usually if a vehicle has been forfeited the driver will also face permanent disqualification from driving, and significant fines and/or a period of imprisonment.

Aside from the possibility of a vehicle being temporarily impounded, drivers who commit hooning offences will face a mandatory period of suspension or disqualification from driving, as well as financial penalties and/or jail.  The length of suspension from driving increases depending on whether the offender has been found guilty of previous offences.

Fines are expressed in “penalty units”, which vary from State to State and in many States will also increase on a yearly basis.

These actions constitute offences for which significant penalties may result.  In the Northern Territory, for example, interfering with an impounded vehicle may result in a fine of $29,800.00 and a maximum jail sentence of up to 12 months.

Should Wheel Clamping Be Illegal? (WA)
A local government body in Western Australia is planning to ban the practice of wheel clamping within its boundaries. The City of Stirling recently voted unanimously to draft the Immobilisation and Detention of Vehicles Local Law 2019. The bill would ban wheel clamping in most circumstances and regulate the detention of vehicles including on private…
Read more…