Whether you are a new driver or a motor enthusiast in Queensland, it is important to be aware of  the state’s anti-hoon laws. Tough penalties apply to reckless driving offences and hooning offences can result in the permanent confiscation of a vehicle. Anti-hooning laws were introduced in Queensland to improve road safety standards and to protect the community against dangerous and anti-social use of motor vehicles. 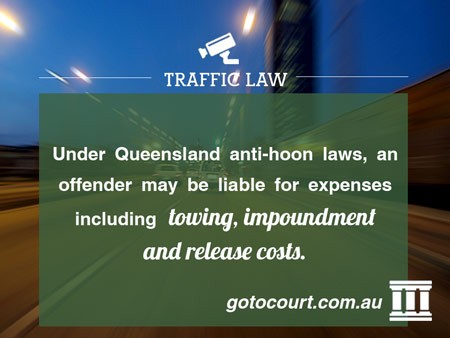 At the end of 2013, amendments were made to the Police Powers and Responsibilities Act 2000 relating to traffic offences. Under the amended provisions of this Act, police have increased powers to impound, confiscate or immobilise vehicles that have been involved in a hooning offence.

In Queensland, offences that can be broadly classed as ‘hooning’ include speeding, playing loud music while driving, careless driving and street racing.

Section 69A of the Police Powers and Responsibilities Act 2000 divides certain ‘hooning’ offences into Type 1 and Type 2 vehicle related offences, depending on their seriousness. Different laws regarding impoundment and immobilisation of vehicles apply depending whether an offence is a Type 1 or Type 2 offence, and depending on whether it is the offender’s first offence or a second or subsequent offence.

Type 1 vehicle related offences include dangerous driving , interfering with a motor vehicle, reckless or careless driving, drag racing, willfully driving in a way that creates unnecessary noise or smoke and failing to stop after being instructed to do so by police (also known as evading police).

Type 2  vehicle related offences include driving in an unregistered or uninsured vehicle, driving without a licence or whilst under suspension, driving under the influence of alcohol or drugs, failing to complete, or refusing to complete a breath or saliva test and speeding at more than 40 kilometres over the speed limit.

What if my vehicle has been impounded?

It is important to keep in mind that even if the car you are driving is not yours, it can still be impounded or immobilised if you commit a hooning offence in it.

Once an impoundment period is over, the driver or registered owner of the vehicle must cover all costs associated with the impoundment, unless the driver has been found not guilty of the charges, or the charges have been withdrawn. These expenses will include towing, impoundment and release costs.

Once an immobilisation period has expired, the registered owner of the vehicle, or an authorised third party, must attend at the property point detailed on the notice of immobilisation to reclaim the number plates and pay any costs associated with the immobilisation.

In certain circumstances, it may also be possible to appeal the impoundment or immobilisation of a vehicle. For example, if the detainment of your vehicle will cause significant financial hardship, or if the offence occurred without your consent, you may be able to apply to the Commissioner of Police for the release of your vehicle. If your application is subsequently refused, you may have additional rights to challenge the decision in the Magistrates Court. A lawyer will be able to assist you to understand the charges against you and advise you on your appeal rights.

Offences relating to impoundment and immobilisation

If your vehicle has been confiscated by the police for hooning and impounded, you are prohibited from moving it from the holding yard during the period of impoundment. To do so is an offence, which attracts a maximum penalty of $4,554.00. It is also an offence to attempt to interfere with a vehicle whilst it is immobilised or whilst the licence plates have been confiscated.

If you require legal advice on a traffic matter or in any other legal matter, please contact Go To Court Lawyers.