The Victorian government takes excessive speeding seriously. Under the Road Safety Act 1986 and the Road Safety (Drivers) Regulations 2009, there are automatic and mandatory licence suspension sentences for drivers who excessively speed.

It is an offence to drive in excess of the speed limit and driving up to 24 kilometres above the limit will often result in a loss of demerit points and a fine. For drivers who speed at 25 kilometres or more above the speed limit, harsher penalties apply.

Below is a table taken from the Act which shows the minimum licence suspension periods for drivers who excessively speed.

The Act operates to automatically suspend the licences of those who speed 25 kilometres or more above the speed limit. A conviction will also be recorded.

Under the Act and Regulations, speed averages can be taken into account as evidence of speed as well as the use of speed detectors.

Objecting to an excessive speeding infringement

Objecting to the infringement means going to court.

An objection must be lodged in writing and set out the following:

Licence suspensions will be automatic if no objection has been given. The suspension and conviction will take effect immediately upon the expiry of the 28-day infringement notice period. If a driver elects to pay the penalty fine for an excessive driving offence, they must also surrender their licence upon payment.

A driver may also be able to argue that they had no control over the vehicle (because of a seizure, for example) or that they had to drive in excess of the speed limit because of a genuine emergency. It is on the driver to prove to the court that they are not liable for the offence. The court will not consider a mistake of fact, such as a defective speedometer, as a defence. 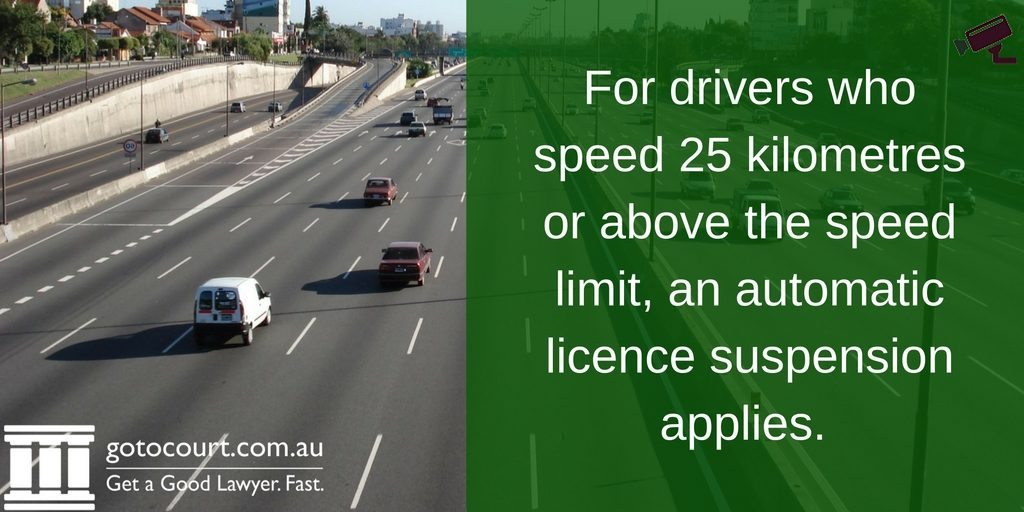 If the court considers a driver guilty of exceeding the speed limit of 25 kilometres or more, it is compelled by the Act to issue a minimum licence suspension period.

Under the Road Safety Rules 2009, the following maximum fines apply if the court finds a driver guilty or an infringement notice is issued and is not objected to:

Depending on the circumstances, the court may also issue further penalties including the following:

The court must suspend a driver’s licence, for the minimum periods set out in the Act, if the driver was driving in excess of 25 kilometres over the speed limit.

Road Rules and Cyclists in Victoria
Cyclists in Victoria are permitted to ride on the roads, on bike paths and on shared footpaths. Cyclists are generally not allowed to ride on pedestrian footpaths. Cyclists must obey all road rules as well as being subject to some extra rules that apply only to bicycles. Failure to obey the road rules can result…
Read more…

Review of Infringements by Fines Victoria
In December 2017, Civic Compliance was replaced by Fines Victoria as part of the Fines Reform Act. Victorians wanting to pay or deal with infringements (also known as ‘on the spot fines’) must now do so through Fines Victoria. Fines can be paid online, by phone, mail or by BPAY. If a person receives a…
Read more…

Impoundment and Immobilisation of Vehicles (Vic)
Under the Road Safety Act 1986, Victorian courts have the power to order that a vehicle be impounded, immobilised or even forfeited, if certain traffic offences have been committed in it. Offences that can result in impoundment or immobilisation of a vehicle include driving under the influence of drugs or alcohol, driving at a dangerous speed,…
Read more…