Victoria has State laws for the issue of search warrants, and there also Commonwealth laws that apply. A search warrant is the written authority from a judicial officer which gives the police the power to enter the premises named in the warrant and search them. Without a warrant police can only come into your premises or search your vehicle if you allow them to, or if they believe a serious offence will be or has been committed or that drugs are on the premises or in the car, if a fight is in progress or an intervention order has been breached.

In Victoria, applications for search warrants must be made in writing and they must be sworn or affirmed to be true and correct. The relevant laws in Victoria are in section 465 of the Crimes Act 1958 ,section 6 of the Magistrates Court Act 1989, Section 6 of the Terrorism (Community Protection) Act 2003 , section 81 of the Drugs Poisons and Controlled Substances Act 1981 and  Section 3E of the Crimes Act (Commonwealth) 1914. 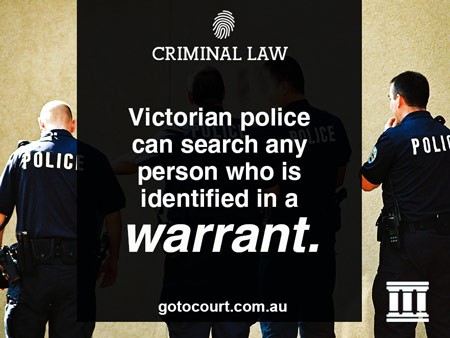 Application for a Search Warrant

An application for a Search Warrant must set out the general nature of the offences that the warrant relates to the reasons that the police have for believing that they will find evidence of that offence on the premises or in the vehicle. The police officer (who must be a Senior Sergeant or higher in rank) must satisfy a Magistrate that they have reasonable grounds to believe that there is (or will be within the next 72 hours), in the building or vehicle something that is connected with the an indictable offence that has been committed or might be committed in the next 3 days, or anything that can be used as evidence for any offence. If they wish to search any person on the premises or in the vehicle, they must get the Magistrates approval. The Magistrate may also endorse the warrant with conditions for the grant of bail for anyone arrested when the warrant is executed. If a warrant is issued, then the reasons why it was granted must be recorded or the warrant is invalid. The warrant can last for up to 7 days unless it is extended by the magistrate.

When a search warrant is issued for ‘drug premises’ – premises which are believed to be used for the making or selling of illegal drugs- the police are given extra powers under the search warrant. Only police officers of the rank of sergeant or higher can apply for these warrants. These warrants are valid for 1 month from the date that they are issued. They authorise the Police to enter the premises or vehicle using necessary force and to search them and any persons found on the premises.

An application may be made (but only if approved by the Chief, Deputy or Assistant Commissioner of Police) to the Supreme Court for a warrant if the Police believe that searching certain premises will help them in preventing the planning of, preparation of or commission of a terrorist offence. The application is made to a Judge and evidence, both affidavit and oral, can be given. The court and the details of the application are closed to the public. If the warrant is approved, the Police are able to enter and search the premises without giving any notice to the owners and/or occupiers of the premises and may cover up any evidence that they have been there.

Applications are made to a Magistrate in the Commonwealth Court for the issue of a Commonwealth Search warrant. The warrant authorises a search for evidence and must be executed by midnight on the 7th day after it is issued. The police must also ask the Magistrate to endorse the warrant if they think they need to be armed when they do the search, and they can only be armed if the Magistrate authorises it.

Searching people during the execution of the search warrant

The police can search any person who is identified in the warrant, and must also give to them a copy of the warrant’s execution copy. Police do not have the power to question or interview persons while they are executing the search warrant but the search may be videotaped and if so any questions and the answers given will be recorded and may be used as evidence in court.

Items seized under a Search Warrant

If the correct procedure for either the issue or execution of the search warrant is not followed then the court may rule that the warrant, and therefore the search, is invalid. If the search is invalid, then any evidence they collected was done so unlawfully and the court might refuse to have it included in the hearing of the charge. It may also mean that those whose premises or person were searched may have a legal claim against the police for assault or unlawful arrest, and for damage or trespass and the return of their goods.