If a police officer in Tasmania wants to search your home for evidence that you have committed a crime, they must have a right to do so, such as by having a valid search warrant. The most common kind of search warrants are issued pursuant to the rules in the Search Warrants Act 1997. A police officer may also apply for a warrant to search your home for stolen property, which is issued pursuant to the Police Offences Act 1935. Other kinds of search warrants can be pursuant to the Crime (Confiscation of Profits) Act 1993 for searching for proceeds of an offence, and pursuant to the Criminal Investigation (Extra-Territorial) Offences Act 1987 for crimes committed in Tasmania under the law of another State or Territory. For Commonwealth crimes (e.g. treason), Tasmanian police may be issued with a search warrant under the Crimes Act 1914. 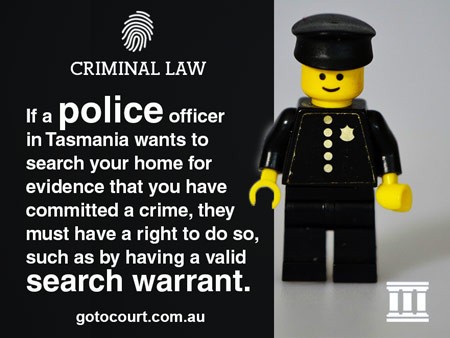 A search warrant can also be issued by the Commissioner of Police to a police officer for the specific purpose of searching for stolen property pursuant to the Police Offences Act 1935. The warrant applies generally, meaning it does not refer to a specific premises to be searched. However, a police officer can only take action under such a warrant if they have reasonable grounds to believe there is stolen property on the premises. These warrants expire after six months.

Under the Crime (Confiscation of Profits) Act 1993 a magistrate can issue a police officer with a search warrant for the purposes of searching premises to find “tainted property”, which includes proceeds of a crime, or something used to commit the crime. The police officer can search certain premises for “tainted property” and to seize that property. Warrants for seizing proceeds of criminal activity can be issued over the telephone and will expire after one month. Furthermore, the police officer can also search people on the premises and arrest them if necessary. Property which is seized is under the care of the Commissioner of Police and will be returned if a person is not charged with an offence relating to the property within 7 days after the property was seized.

A magistrate can issue a police officer with a search warrant under the Criminal Investigation (Extra-Territorial) Offences Act 1987 for the purposes of searching premises for any evidence that a person has or will commit an “extra-territorial offence”. An extra-territorial offence means an offence under the laws of another State or Territory which would also be a crime under Tasmanian law. Such a search warrant can only last for 28 days. It is an offence to hinder a police officer from executing the warrant. You could be sentenced to up to 12 months imprisonment, or you might be required to pay a fine of up to 20 penalty units ($2,800). Both penalties can be imposed simultaneously.

Police officers and members of the Australian Federal Police also have access to search warrants under Commonwealth law if a person is suspected of committing or planning to commit a Commonwealth crime (e.g. terrorism). These warrants allow the police officer to search your home for evidence. They may also search your car or your person. The police officer can also take photographs and video recordings, and access your computer. Such warrants are issued by a magistrate or a justice of the peace and last for a maximum of 7 days. A request for such a warrant can also be made via the telephone if a warrant is required urgently.

Jury Service (Tas)
In Tasmania, some criminal matters and a few civil matters are determined by a jury. The right to trial by a jury is based on the principle that limits should be placed on the power of the state over people’s lives. However, the vast majority of criminal matters in Tasmania are dealt with summarily (in…
Read more…

Youth Detention (Tas)
The only youth detention centre in Tasmania is the Ashley Youth Detention Centre. It is operated by Children and Youth Services and houses both males and females between the ages of 10 and 18. Young people aged over ten who are charged with criminal offences in Tasmania can be remanded or sentenced to detention under…
Read more…

Animal Cruelty Offences (Tas)
The Tasmanian Animal Welfare Act 1993 regulates the treatment of animals under human care or charge, including domestic animals and animals held for commercial purposes. The act defines animal as including all live vertebrate animals except for humans. The act stipulates that humans having control of animals have a duty of care and sets out…
Read more…

Dangerous Criminal Declarations (Tas)
Tasmanian legislation allows courts to declare a person a dangerous criminal if they fulfill certain criteria. A declaration that an offender is a dangerous criminal means that the person is not released from custody until the declaration is discharged. In practice, this can mean that an offender remains in custody for many years beyond the…
Read more…