Breach of Bail in Tasmania

In Tasmania, bail is an undertaking which allows an accused person to be released from custody after being charged with a serious offence. It will include conditions that they appear in court when required to. There may also be several further conditions, depending on the seriousness of the offence said to have been committed and the history of the accused person. Bail can be granted by police officers and also by the courts. Breaching a bail is a serious matter with penalties including prison and/or fines.

A breach of bail in Tasmania will also be recorded on an accused person’s criminal record and it will make it harder for them to get a grant of bail if they are charged with other matters in the future. The law on bail in Tasmania is contained in the Bail Act 1994. 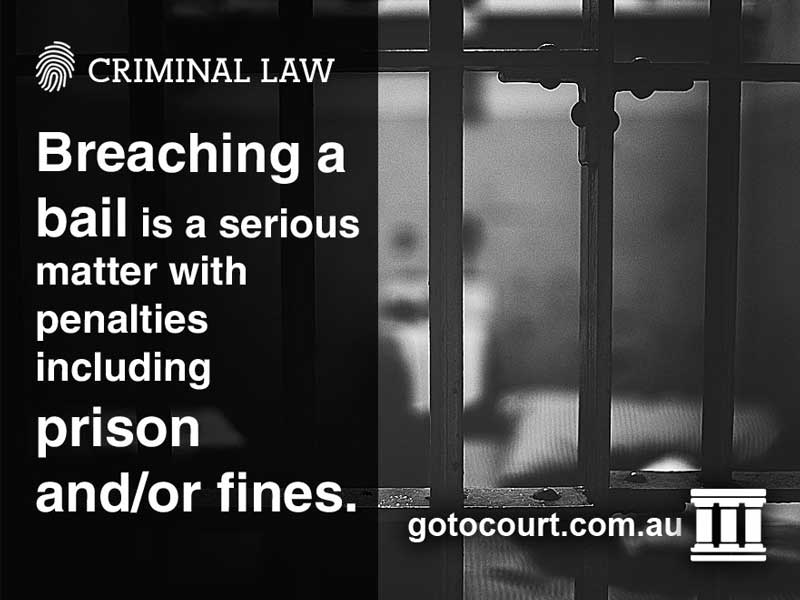 An accused person who is on bail and who, without reasonable cause (excuse), breaches their bail by not coming to court when they are required to, or by breaking any of the conditions of that bail is guilty of a criminal offence.  They may be given a penalty of a fine up to $3,080.00 or imprisonment for up to 12 months, or both.

A justice or a judge of the Court of Criminal Appeal or the Supreme Court may issue a warrant for the arrest of an accused person who is on bail and who fails to appear at a court as required.If an accused person on bail does not attend court when they are required to, then the court must order that any money that they or any surety they have deposited or promised to forfeit in the bail must be forfeited to the Crown within a time that they determine. An order to forfeit the monies can also be made if the accused person fails to comply with their bail conditions. The court can, after hearing from the person whose money it was, revoke or amend that order to be a part payment.

If the order is made in respect of money that there is an agreement to forfeit, it is taken to be a fine imposed by the Court that may be referred for collection and enforcement to the Director, Monetary Penalties Enforcement Services. An application can be made by the person who has forfeited the money for the return of all or some of those monies. That application must be made within 2 months of the failure to appear, unless the court extends that time.[If an application is made to the court for forfeiture of the amount deposited or guaranteed by a surety a copy of the application will be served upon the surety. The surety will be given the opportunity to come to court for the hearing of the application. The court may order that some or all the amount is forfeited. If the amount is not paid the penalty will be enforced in the same way as a fine. The court will consider the following: