If you have been charged with an offence in New South Wales, the presumption is that you are innocent until you are proven guilty in a Court of law. As a result, you have a right to be free until a Court determines whether you are guilty. There are, however, some situations where you might be kept in custody (on remand) until you are required to appear in Court to answer your charges. For example, there may be a suspicion that you will abscond and a decision might be made to keep you in police custody until that time. 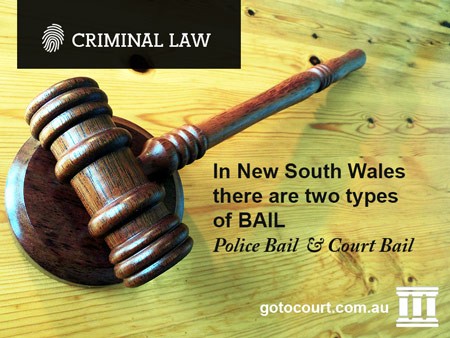 In NSW, according to the Bail Act 2013, bail is the authority to be at liberty for an offence or an alleged offence. The decision can be made by a police officer after you have been arrested and given a notice to attend Court. This is known as ‘police bail’.

Section 44 of the Bail Act 2013 states that a police officer with the ranking of sergeant or above must make a decision as to bail as soon as reasonably practicable after an accused in police custody has been charged with an offence. An officer holding a rank higher than sergeant or in charge of a station can make a decision to:

If you do not receive police bail, a police officer must bring you before a Court as soon as practicable for a Magistrate to hear your matter or decide whether to grant you bail until a further appearance in Court. This is called ‘Court bail’.

The officer must give you the means to contact a lawyer or ‘other person’ regarding bail. In some situations you may be refused the right to contact an ‘other person’ if the officer suspects it may result in the escape of an accomplice or destruction of evidence. Police are rarely able to use this reason to stop an accused from contacting a lawyer.

In NSW, if you are granted bail by a police officer this may be subject to conditions that ensure you will appear in Court after being released from custody. Common conditions include daily and weekly reporting to a police station, curfews and a promise not to approach witnesses.

If you are at first refused Police bail, you have a right to have that decision reviewed by a senior police officer. If you have been arrested on a Friday night or during the weekend, this review can be critical as you will otherwise have to wait until Monday morning for your next opportunity to make a bail application for ‘Court bail’ in front of a Magistrate.

If you make an application for Court Bail, the Court can dispense with bail, grant bail (with or without the imposition of bail conditions), or refuse bail.

The Bail Act 2013 classifies offences as ‘show cause’ or ‘not show cause’ depending on their seriousness.

For a ‘show cause’ offence, the starting position is that you should not be released from custody unless you can show there are very good reasons for why you should be released.

If you have been charged with an offence that doesn’t require you to ‘show cause’, the starting position is that you should be released from custody unless there are reasons for why you should not be released.

In some circumstances in making a bail application you will need to show that you are not a risk and that bail should be granted. A list of show-cause offences is found in section 16B of the Bail Act 2013. Any offence that attracts a jail term of life imprisonment and serious indictable offences such as sex offences are included in this section.

The Court will keep you in custody for a show cause offence unless you are able to show there is no unacceptable risk that you will:

If there is no risk of any of the above occurring, your bail application should be granted. If there is a concern that releasing you will present one of the above risks, a determination will then need to be made as to whether the risk can be controlled by imposing a bail condition. If the risk is then deemed unacceptable, the Court must refuse bail. In determining whether a risk is unacceptable, the Court will consider a variety of factors including (but not limited to) the accused’s background, criminal history and ties, and the nature and seriousness of the offence.

If you have been charged with an offence which does not require you to show cause, you must be released from custody unless the Court believes you pose an unacceptable risk. In NSW, factors such as your criminal history, current living arrangements and whether you have a history of not complying with Court orders will be taken into account by the Court when making such an assessment.

If you have been granted bail, it may be subject to certain conditions which could specify where you must reside and with whom you may or may not communicate.

If you have a valid need to change a bail condition – for example, if you need to change your address – you will need to apply for a bail variation. If you fail to do so, you may be charged with a breach of bail which may result in your bail being revoked.