When a person dies, a number of things may happen to their estate. If they have created a valid will before their death, the executor nominated in the will can apply to the Supreme Court for a grant of probate to administer their estate.

If the deceased did not make a valid will before their death, they die as an intestate. The rules of intestacy in NSW are set out in the Succession Act 2006. In these circumstances, rather than the deceased’s executor applying for probate, the Supreme Court of New South Wales will issue letters of administration, which allow an administrator (which will usually be the deceased’s spouse or next of kin) to distribute assets in the manner prescribed by the intestacy rules.

What is intestacy in NSW?

The rules are very prescriptive, and it is important to note that they remain subject to any person seeking a family provision order from the estate. 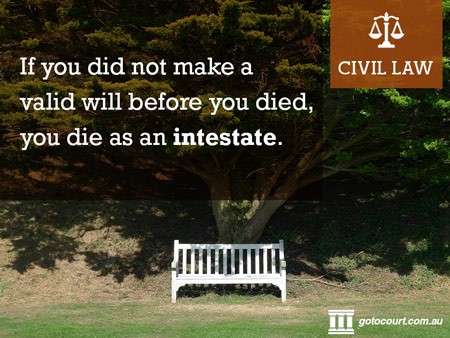 The main rules for the distribution of intestate estates in New South Wales are as follows:

If you are an Indigenous Australian and you die as an intestate, your assets can be divided in accordance with the laws, customs, traditions and practices of your Indigenous community.

An application for such distribution can be made by the administrator of your estate, or by a person who would be entitled to part of your estate if it was distributed in accordance with your community’s customs.

If the Supreme Court of New South Wales authorises the distribution, then the customs of your community for distribution will override the intestacy rules described above.

Grants of letters of administration

In the case of small estates (ie estates of less than $15,000), a Registrar can grant letters of administration.

Distributing assets after grant of letters of administration

Before an administrator distributes an intestate’s assets, they must give notice of an intended time at which they intend to distribute the assets. That time cannot be less than six months after the death of the intestate.

The purpose of distributing a notice is to give people (eg the intestate’s creditors) an opportunity to inform the administrator of their claims over the assets. If the administrator then distributes the assets, they are protected from any claims not made to them during the notice period.

The administrator can also make a maintenance provision for a person who survives the intestate and was maintained by them.