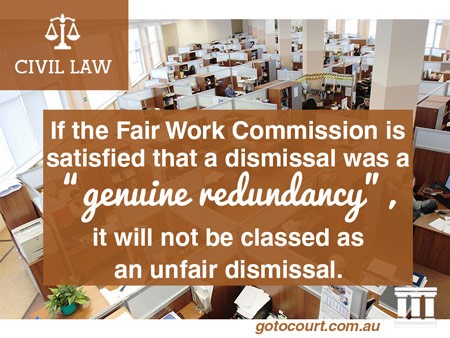 The Fair Work Act defines ‘genuine redundancy’.  Firstly, the job that was performed by the employee that has been dismissed must no longer be required by the employer because of a change in the operational requirements of the employer’s business.  This could be the case for a variety of reasons; for example:

Secondly, the employer must have complied with any requirement under a modern award or enterprise agreement into which they have entered with the employee to consult with them about the redundancy.

Employers are required to make active attempts to redeploy an employee who is made genuinely redundant.  There has been some case law since the Fair Work Act commenced in 2009 explaining when a redeployment may be reasonable, and what an employer’s redeployment obligations are.

It is not enough for an employer to simply help an employee find alternative employment, even if that employment is in the same company.  For example, letting the employee know there are vacancies in the company that they can apply for will not satisfy an employers’ redeployment obligations.

The employer may also be required to consider redeployment overseas, or whether the redundant employee would be suitable for a new role after a reasonable training period.  It also may not matter whether an alternative role is inferior or involves less remuneration; it generally speaking must still be considered as an option.  It all depends on the individual circumstances.

Am I entitled to redundancy pay?

What if I am not covered by the national system?

Only certain employees are covered by the Fair Work Act.  For example, public sector employees in NSW, Victoria and WA are covered by State industrial relations legislation.  Whether or not a dismissal really was a case of redundancy is a criteria which the State industrial relations commissions may consider when determining whether a dismissal was fair or not.

Employees covered by the State systems may still be able to bring a claim under anti-discrimination or industrial relations legislation in their State or Territory.  For example, an employer cannot dismiss an employee on the basis of their race in New South Wales under the Anti-Discrimination Act 1977.  Similar rules apply in the other jurisdictions.