Whether you engage people for work or carry out work for others, it’s crucial to be clear about the legal status of your working relationship. It is important to note that, even if the parties agree that the relationship is (for example) one of principal and contractor, a Court or Tribunal might determine that it is in fact an employment relationship.  Whether a worker is an employee or a contractor is one of the most common questions for businesses and individuals entering into working relationships. In Australia, there is no single fixed definition for ‘employee’ or ‘contractor’, but there are legal principles that can give you a general idea of the nature of your work arrangement. 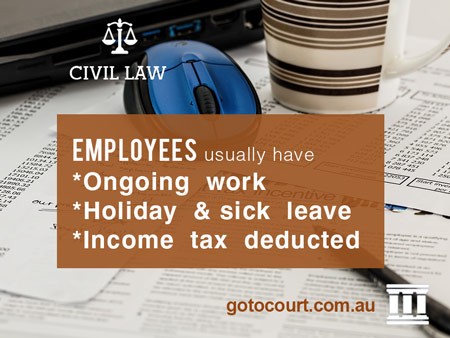 Who is an employee?

If an issue does go to court, the court will look at all the facts and apply a multi-factor test, rather than follow a fixed set of rules.

Generally, employees are workers who perform work under the direction and control of their employers and work fixed hours; although casual employees might work variable hours.  Employees usually have an expectation of ongoing work, the right to paid leave and sick leave, and have income tax deducted by their employer.  The direction and control test is why an employment contract is often referred to as a “contract of services” whereas an independent contractor is engaged in a “contract for services”.

How state and territory legislation defines who is an employee

Many people employed in Australia will be covered by the Fair Work Act 2009 (Cth) (“FWA”). For the purposes of the Fair Work Act 2009 (Cth), the term ‘employee’ has its ordinary meaning (and states that people on vocational placements are not included in the definition of ‘employee’).  Many of the States have industrial relations legislation which also refers to the accepted definition of ‘employee’: for example, section 7 of the Industrial Relations Act 1979 (WA) refers to an employee as including those people whose “usual status is that of an employee”.  This means ‘employee’ takes a common law meaning based on the principles developed by the courts over time.  However, this legislation can also “deem” certain people to be employees (who aren’t usually considered employees under common law) for the purpose of the application of the legislation: see, for example, section 275 of the Industrial Relations Act 1999 (Qld).

Refer to our article on the National Employment Law for further information and to find out whether you are covered by State or Commonwealth law.

There are certain indicators courts will look at to decide whether your relationship is one of employee or contractor. In addition to control over how work is performed, whether you pay your own tax, whether you have maximum hours of work, whether you supply your own equipment, and whether you have an expectation of ongoing work, employees and contractors differ on the level of risk they take on. As a contractor, you generally bear the risk and responsibility for any loss, poor work, and injury relating to the work you do; however in some circumstances a principal may also be vicariously liable. You arrange your own insurance coverage (if applicable), and typically pay your own tax and superannuation. You have no statutory minimum entitlements such as paid leave. For your work, you provide invoices that feature your ABN. Having the right to subcontract your work to another is also another indicator that you might be a contractor. The ATO the Business.gov.au website offer self-assessment tools that can be used as general guidance on whether your relationship is closer to that of an employee or a contractor.

What happens if contractors and employees are hired under the wrong category?

Employees and contractor rights are protected by different legislation, including the Fair Work Act 2009 (Cth) and the Independent Contractors Act 2006 (Cth). If you engage someone for work, it is important to understand that the actual relationship may be different from what the intended relationship is. Whether someone is a contractor or employee impacts issues such as entitlement to workers’ compensation in the event of injury, benefits, leave entitlements, and other basic employment rights. It can also affect issues such as superannuation, unlawful termination, and personal liability for defects in work. If you treat someone as a contractor when they are in effect an employee – such as in a sham contracting arrangement – you run the risk of having action brought against you by the Fair Work Ombudsman or by your employee for failing to provide the minimum standards for employment.

The contractor-employee issue can impact your work relationship in other ways. For example, if you invent or design something at work, there could also be issues about who owns the intellectual property over the design. The inventor of a new work usually holds the copyright, but section 35(6) of the Copyright Act 1968 (Cth) says if the work is created under a contract of service (an employee-employer relationship), then the employer holds the copyright. There are no simple rules for determining whether one is a contractor or employee. If you have any doubts, seek advice from a solicitor about the nature of your work relationship.