Generally, Australian employees are working under an award, and are covered by either the national workplace relations system or the workplace relations system of the State or Territory in which they live. Under each system, an employee may be subject to the terms of an award or modern award, which sets out the minimum conditions of employment including the rates of pay for workers in particular industries or occupations.

For those working under an award in the national workplace relations system, the relevant law is mainly found in the Fair Work Act 2009. It is generally applicable to employees of ‘constitutional corporations’, employees in the Northern Territory, Victoria and the Australian Capital Territory, private sector employees in certain jurisdictions including in South Australia, New South Wales and Queensland, and employees in the private sector or local government in Tasmania. Other employees are covered by their State of Territory system. 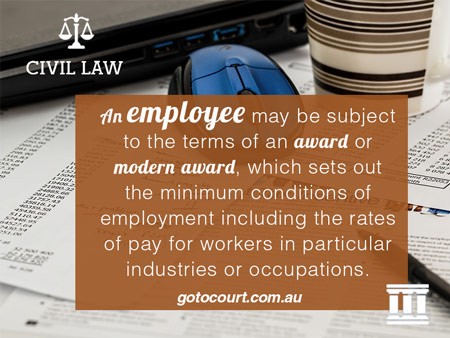 How will I know if a modern award applies to me?

A modern award states what employees and employers it covers. Your employer should let you know whether you are working under an award or if a modern award applies to you when you start a new job.

The Fair Work Act 2009 sets out what kinds of terms can be included in a modern award. A modern award can only make certain kinds of amendments to the National Employment Standards (e.g. by including terms dealing with cashing out and taking annual leave or by providing for averaging of weekly work hours).

Certain terms must be included in a modern award, including terms dealing with minimum wage, overtime and superannuation. There must also be a flexibility term, which allows an employee to negotiate with their employer for an ‘individual flexibility arrangement’ about how the modern award applies to them.

Certain terms cannot be included, such as discriminatory terms, or terms that differ between employees in different States and Territories. Employers whose employees are working under an award and who contravenes a modern award may be ordered to pay a maximum civil penalty of 60 penalty units (i.e. $10,200).

A court may also order that an employee be compensated if he or she suffered damage due to breach of the award by an employer.

Working under an award in States and Territories

Employees may be working under an award which is covered by their State or Territory workplace relations systems – a State-based award. The rules for how such an award is made is generally less prescriptive than under the national system, particularly in respect of the terms to be included in such an award. However, in some States and Territories there are minimum standards that prevail over awards that do not satisfy those standards (e.g. minimum requirements in South Australia relating to issues such as remuneration).

In Western Australia, only employees who are employed by a constitutional corporation or the Commonwealth government will be covered by the Fair Work Act 2009. All other employees, including employees of sole traders, partnerships or trustees, will come within the WA Industrial Relations Act 1979 and may be covered by a WA award. The Industrial Relations Commission of WA lists on their website all awards and industrial agreements applying to these employees.