From 1 January 2014, most workers in South Australia are covered by anti-bullying laws contained in the Fair Work Act 2009 (Cth). These rules apply broadly to people who are not just employees, but also contractors, subcontractors, outworkers, apprentices, trainees and volunteers. However, only those workers who work for a ‘constitutional corporation’ or the Commonwealth government are covered by the laws. This means that if you work in for the South Australian government or a local government, or for a sole trader, a partnership or a trust, you probably won’t be covered by these laws. If you work for one of these excluded entities, you can make a complaint of workplace bullying to Safework SA, the workplace health and safety regulator in South Australia. 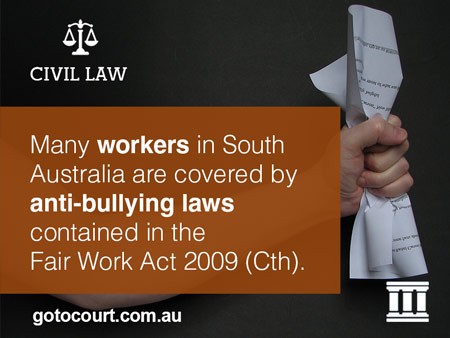 What is workplace bullying?

Under the national anti-bullying laws, workplace bullying consists of unreasonable behaviour that is repeated towards a worker, and that is detrimental to that worker’s health and safety. For example, workplace bullying can involve teasing or making practical jokes, acting aggressively or in an intimidating manner, placing unreasonable expectations on a worker and their performance, excluding a worker from work events like Christmas parties, displaying offensive material or spreading rumours about a worker. However, workplace bullying does not include isolated incidents of the above kinds of behaviour; it must be repeated and detrimental to that worker’s health and safety. Workplace bullying also does not include “reasonable management action” in relation to a worker, which can include performance managing a worker in a reasonable way or taking disciplinary action against a worker for misconduct in the workplace.

If you have suffered an isolated incident of inappropriate behaviour in the workplace, you still ought to make a complaint to your supervisor or employer so that the behaviour is addressed immediately, even if it does not fall within the definition of bullying under the legislation.

If you make an application to the Fair Work Commission, they will begin to deal with the application within 14 days. A copy of the application is then sent to your employer and the person you claim was bullying you. They are given a chance to respond to the application, which they must do within 7 days of receiving their copy of the application. Once the Fair Work Commission receives the response, they may organise a mediation, or hold an informal conference or hearing. The Commission Member hearing the dispute will then make orders they consider to be necessary to prevent further bullying. This could include, for example, requiring monitoring of the bullying persons’ behaviour, and ordering that the bullying person stop doing the things which constitute bullying. Contravening an order carries a maximum penalty of a fine of 60 penalty units (ie $10,200 for an employer).

Any anti-bullying behaviour towards you may also be discriminatory conduct if it constitutes less favourable treatment on the basis of your sex, age or religion, amongst other things. Under the Fair Work Act 2009 (Cth), employers cannot take ‘adverse action’ against you, including the termination of your employment, on a ground that is unlawful under an anti-discrimination law. Breaching this rule carries a maximum penalty of a fine of 60 penalty units (ie $10,200).

Safework SA is the workplace health and safety regulator in South Australia. It enforces the rules contained in the Work Health and Safety Act 2012, which imposes obligations on employers to maintain a workplace without risks to a worker’s health and safety. You can lodge a complaint with Safework SA if you are experiencing workplace bullying and do not have redress under the national anti-bullying laws. The function of Safework SA in dealing with workplace bullying is less defined by the legislation than the Fair Work Commission. It can provide advice and assistance for dealing with bulling behaviour and take action against an employer such as imposing fines; however, it does not have specific powers to make orders to stop bullying behaviour. It can order compensation to be paid to you by your employer if your employer has engaged in discriminatory conduct against you for raising a work health and safety issue.