Stamp duty in South Australia is a fee charged and regulated by the state Government though RevenueSA. It is payable on any property transfer or commercial dealing that falls into the classification of a ‘dutiable’ transaction.

Stamp duty is payable either at a pre-determined flat rate or at a rate based on the value of the transaction, depending on the type of transaction. For example stamp duty payable on a house purchase is calculated based on the purchase price.

The RevenueSA website has online calculators and fee schedules to help you calculate the stamp duty fees payable on your transactions. 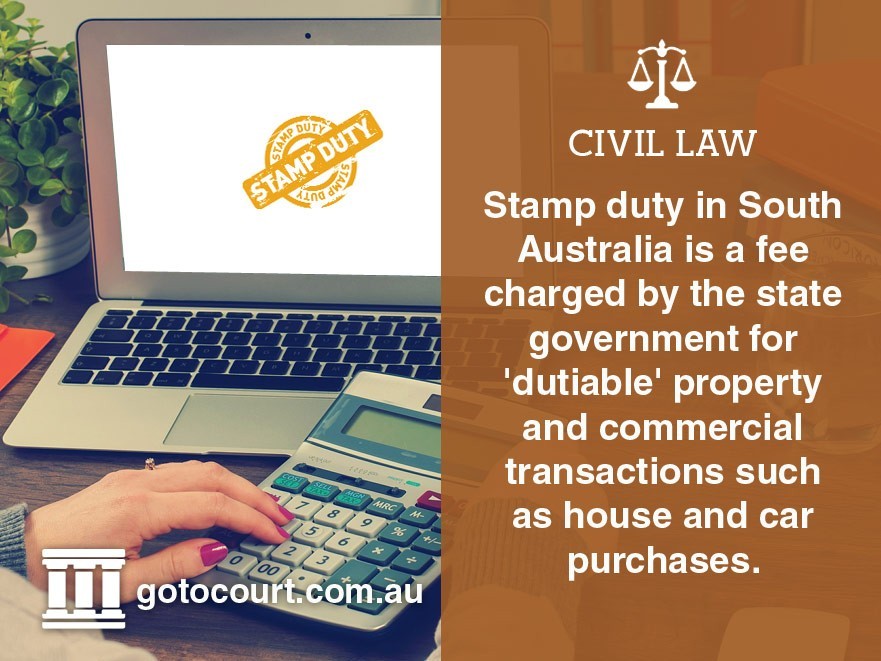 Stamp duty in South Australia is only imposed on property and commercial dealings deemed to be ‘dutiable’. A ‘dutiable’ transaction in relation to some transfers of land is defined in section 100 of the Stamp Duties Act 1923. This section is quite lengthy and complex, but the aim is simply to impose stamp duty where a person is gaining an interest in property or a commercial asset of value.

In practice, RevenueSA considers the following types of property dealings to be dutiable transactions:

If you are unsure whether your transaction is ‘dutiable’ for stamp duty purposes, further information can be found on the RevenueSA website.

There are a number of exemptions to stamp duty in South Australia. Generally these exemptions are based upon the relationship of the parties involved, the type of property being transferred, or where the Government has decided to no longer charge stamp duty on a specific type of transaction.

For example, some transfers between a husband and a wife will be exempt from stamp duty. Other common exemptions include leases entered into after 1 July 2004 and mortgages dated after 1 July 2009.

In addition, the South Australian Government recently declared business transfers and share transfers undertaken after 18 June 2015 to be exempt from stamp duty unless part of an agreement entered into prior to that date. The transfer documents will still need to be stamped through RevenueSA, as these changes have not yet been fully implemented.

The South Australian Government provides full or partial concessions on some transactions. These concessions do change quite frequently and often have strict conditions attached.

Currently, many ‘off the plan’ home purchases where the contract was signed between 31 May 2012 and 30 June 2014 is eligible for a full stamp duty concession. There is also a partial concession available for contracts which were entered into between 1 July 2014 and 30 June 2016. Some restrictions apply in relation to the location and value of the property.

As the concessions change quite frequently, it is best to obtain legal advice to find out if you qualify and what conditions will apply.

Changes to the budget of the South Australian Government often also affect the exemptions and concessions available.

This article reflects the state of the law as at 3 December 2015. It is intended to be of a general nature only and does not constitute legal advice. If you require legal assistance, please telephone 1300 636 846 or request a consultation at gotocourt.com.au.