A debt is a sum of money owed by a debtor to a creditor which is legally enforceable.

Debt recovery is the legal process and procedure which a creditor can initiate to get back the money which is owed by the debtor.

What is and what is not a debt

Strictly speaking, a debt arises in situations where the legal liability on the debtor to pay or repay money is clear, and the debtor has failed to meet his, her, or its obligation to pay the creditor. 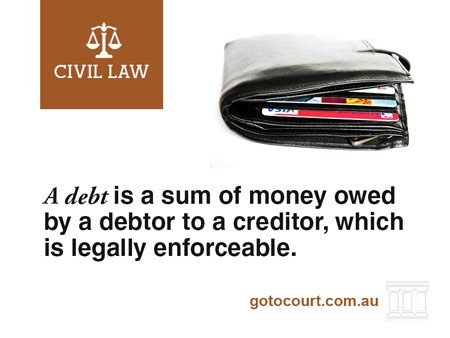 Common situations where a debt may arise include:

If the liability to pay is questionable, then debt recovery may not be the appropriate procedure for the person who is seeking to be paid. For example, a contract may specify that a sum is payable upon completion of a project. However, the person who was to have paid queries whether the project has been completed to the required level of skill and care. In this situation the legal issue may be whether there is a breach of contract or negligence, and debt recovery proceedings may not be suitable.

We recommend you speak to a lawyer prior to commencing debt recovery proceedings on your own so that you can get the right advice regarding whether this is the appropriate course of action for your situation.

Where debt recovery proceedings are initiated

Once a letter of demand has been sent, if a debtor either ignores the letter or refuses to pay, then the creditor may commence proceedings to recover the debt.

The appropriate Court or Tribunal for the commencement of proceedings will depend on:

For example, the Queensland Civil and Administrative Tribunal (QCAT) has jurisdiction to hear debt disputes for amounts under $25,000, provided that the matter is related to certain kinds of disputes such as money lent and not repaid, unpaid invoices, and IOUs. It also has jurisdiction to send to a hearing those disputes which relate to a sum of money less than $3,000.

Each of the Courts in the individual states and territories has a different jurisdictional limit, which you should check prior to initiating proceedings. The Supreme Court of Western Australia, for example, hears civil matters where the amount in dispute is over $750,000, whereas in South Australia either the District Court or the Supreme Court may hear civil disputes of $100,000 or above.

The procedure for debt recovery

The procedure for debt recovery depends on the Court or Tribunal in which the creditor commences proceedings to recover the debt. We recommend you seek advice from a lawyer prior to commencing your claim to ensure you follow the correct procedure.

It is always recommended that a creditor endeavour to resolve a debt recovery issue with a debtor through negotiation unless it is inappropriate in the circumstances, such as where there has been a threat of violence or a debtor cannot be located.

Some states and territories have government departments which offer dispute resolution services, such as the Victorian Small Business Commissioner or the Department of Justice and Attorney General’s dispute resolution branch in Queensland.