Australian citizenship is the status of enjoying and fulfilling the same rights and duties as of those who are naturally born in Australia.

Some of the rights that are exclusive to Australian citizens include the following:

Australian citizenship is about being a part of the community. As such there are duties and obligations attached to the enjoyment of citizenship of Australia. These include the following: 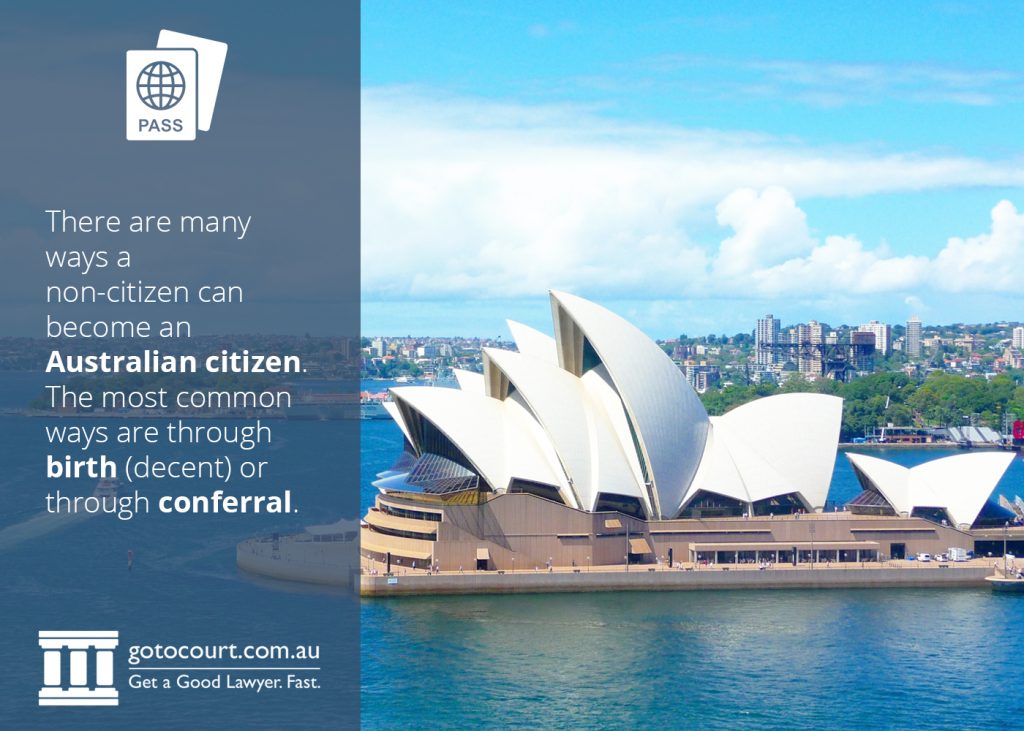 How is citizenship obtained?

There is no singular way to obtain Australian citizenship. The following are some of the methods or circumstances of which non-citizens can obtain citizenship of Australia:

How do you obtain Australian citizenship by conferral?

Citizenship conferral happens when you are granted Australian citizenship by meeting the specified eligibility requirements and passing a citizenship test.  The Department of Home Affairs provides a useful outline of the citizenship by conferral process.

Generally, Australian citizenship by conferral can be granted when the following criteria is met:

A person is generally eligible for citizenship by conferral if they meet the following:

Under the Australian Citizenship Act 2007 you will need to satisfy the following:

Is there a citizenship test?

The Australian citizenship test was created to ensure applicants have competent knowledge of Australia and the underlying rights and duties of being an Australian citizen. The test also gauges how well a person understands English, which is Australia’s national language.

The Department of Home Affairs has a number of resources available for you to test your knowledge in preparation for the citizenship test.

Reasons citizenship can be refused

The Minister for Immigration may refuse an application for citizenship on the following grounds:

Applications for appeal can be made to the Administrative Appeals Tribunal within the specified timeframes indicated on your refusal letter.

The ceremony usually takes place within three months after your application is approved by the Minister. Waiting times will vary, though, between various local councils.

You will receive an invitation by your local council which you elected when you made the application for Australian citizenship. The invitation will provide you with details of the ceremony.