In August 2015, close to 600 visa holders who had been convicted of violent crimes, drug trafficking and paedophilia were deported from Australia by Immigration Minister, Peter Dutton. This was at the heels of policies being passed in which non-citizens, including Permanent Residents, would imperatively lose their visas if they failed the character test. This is also true for Special Category Visa subclass 444 New Zealand citizens.

The policy in question is section 501 of the Migration Act 1958, which applies a character test to all non-citizens, including non-migrating family members and sponsors of visa applicants.

Regardless of which type of visa you are applying for; it is mandated that you inform the Department of Home Affairs of any criminal convictions whether made against you inside or outside of Australia. A criminal conviction also includes convictions which have been deemed ‘scrubbed’ from the official record or were ‘not recorded.’ 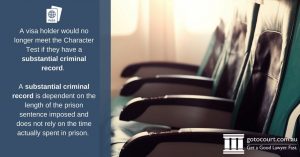 You may also be required to provide police certificates as part of your assessment against the character test. Failing to comply may result to refusal or cancellation of your visa.

What is the character test?

To pass the character test, you need to prove that:

What is a Substantial Criminal Record?

Will my cancellation be permanent?

If you were removed or deported from Australia after your visa has been cancelled on character grounds, you will be permanently ruled out from being given another visa to enter Australia. This visa cancellation will prohibit you from applying for other visas to remain Australia, too.

Currently, there is no visa for those who were previously deported on character grounds to re-enter Australia.

Can I appeal the cancellation?

Cancellation of a visa under section 501 of the Migration Act 1958 is automatic through the operation of law. What that means is that non-citizens must apply to have their visa cancellation revoked by the Department of Home Affairs if they believe they should continue to reside in Australia.

Non-citizens must apply to have their visa cancellation revoked within 28 days from the date of the cancellation notice. They must then provide the Department of Home Affairs with documentary evidence which supports their reasons for having the cancellation revoked; such as close family ties in Australia, that the conviction was for a non-violence offence, or that they no longer pose an unacceptable risk to the Australian community.

The Tribunal will have 84 days to come up with a new resolution. If it does not, then the original decision to cancel or refuse the visa must be followed.

You may still seek judicial examination of the resolution if you feel that the decision was not lawfully decided.

The right to appeal is revoked if the Minister made the cancellation personally. It is mandatory to cancel your visa on the basis that you are currently serving a custodial sentence and have been sentenced to 12 months or more. Your right to appeal is also denied if you have been imprisoned of or were proven guilty of a sexually based crime involving a child.