An injunction, which can also be referred to as a restraining order, is a court order that makes or prevents a person from acting in a certain way.

Injunctions form part of the trial process and are not a cause of action in of themselves. This means that an originating application, such as an application for breach of intellectual property rights, must be made to the court first before an injunction can be obtained to protect the claimant’s rights while waiting for the court to determine the final matter.

Obtaining an injunction in the Federal Circuit Court

The court deals with matters relating to the following legal matters: 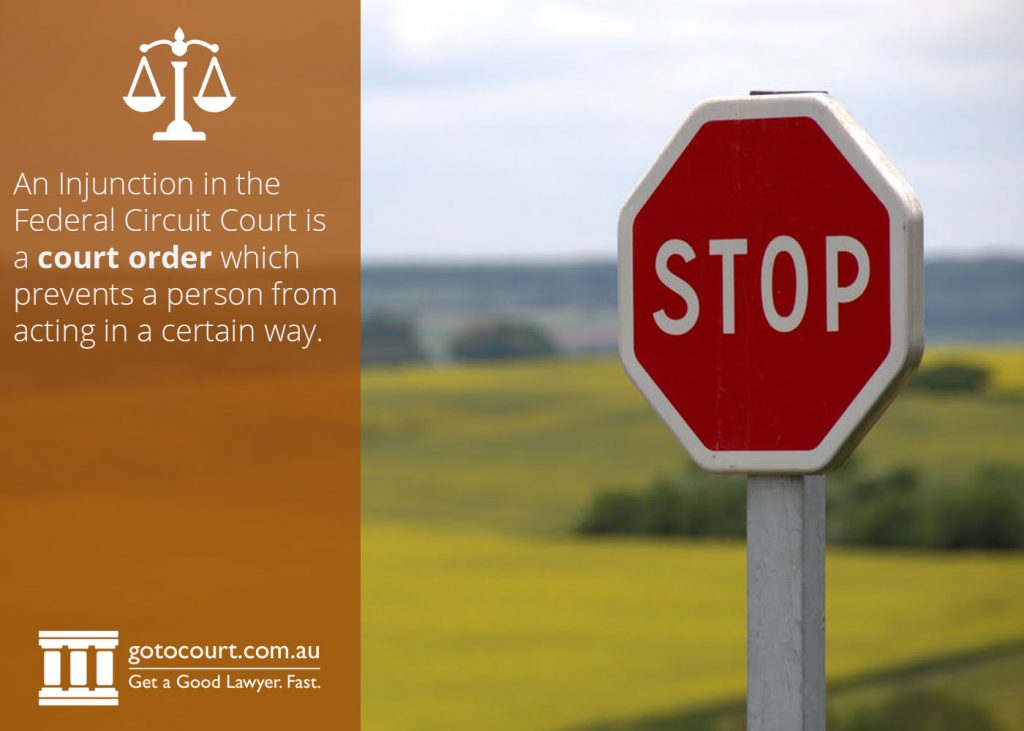 Some examples of the type of injunctions the Federal Circuit Court can make include the following:

Jurisdiction of the Federal Circuit Court for injunctions

If the matter concerns something that is outside of the court’s jurisdiction or is appealed, then an application or appeal can be made in either the Federal Court of Australia or the Family Court of Australia.

The Federal Circuit Court does not deal with criminal law matters, nor matters which come under the jurisdiction of state or territory courts.

You can obtain an injunction in the Federal Circuit Court whilst the originating matter is before the court or before the matter has been dealt with at trial.

An injunction can be requested as part of an application when first applying to the court to hear the matter. A grant of this injunction is decided at the same time as the final orders of the matter.

An injunction may also be sought to prevent or make a party to the matter act in a certain way, after the original application has been made but before the court has made a final order. These types of injunctions are sought as a matter of urgency and may be made in relation to the preparation of a matter for trial, such as to prevent a party from destroying certain documentation. This type of injunction does not decide the rights of the parties but is used rather as a way of making sure the matter is dealt with fairly.

For example, whilst a property settlement matter is awaiting trial, a non-bankrupt party to a marriage can apply for an injunction to prevent a trustee from declaring or distributing dividends amongst creditors of the bankrupt or debtor spouse.

Discharging or varying an injunction

The Federal Circuit Court also has the power to discharge or vary the terms of an injunction. This is a discretionary power and in some instances the court can do this without an application being made. This is common in some family law matters.