In Australia, police generally do not have the power to stop and detain you for the purposes of a search. There are, however, a number of special powers police have which allow them to compel a person to submit to a personal search, depending on the state and territory.

In most cases, police are required to hold a genuine suspicion or belief that a particular circumstance exists. What this means is that the police officer must form an opinion on whether a circumstance exists on the evidence which is available. It cannot be a ‘mere idle wondering’ but a genuine and rational thought. For example, a police officer would form a reasonable suspicion that a person has a dangerous substance on their person if a detention dog indicates there is an odour of a dangerous substance.

There are also specific rules which police officers must follow as they complete a personal search, regardless if it is with a search warrant or without one. This article looks at the various state and territory rules with respect to police powers to conduct personal searches without warrant and what kinds of searches police have the power to conduct. For more information in relation to police searches under a warrant, read our article, Search Warrants in Australia. 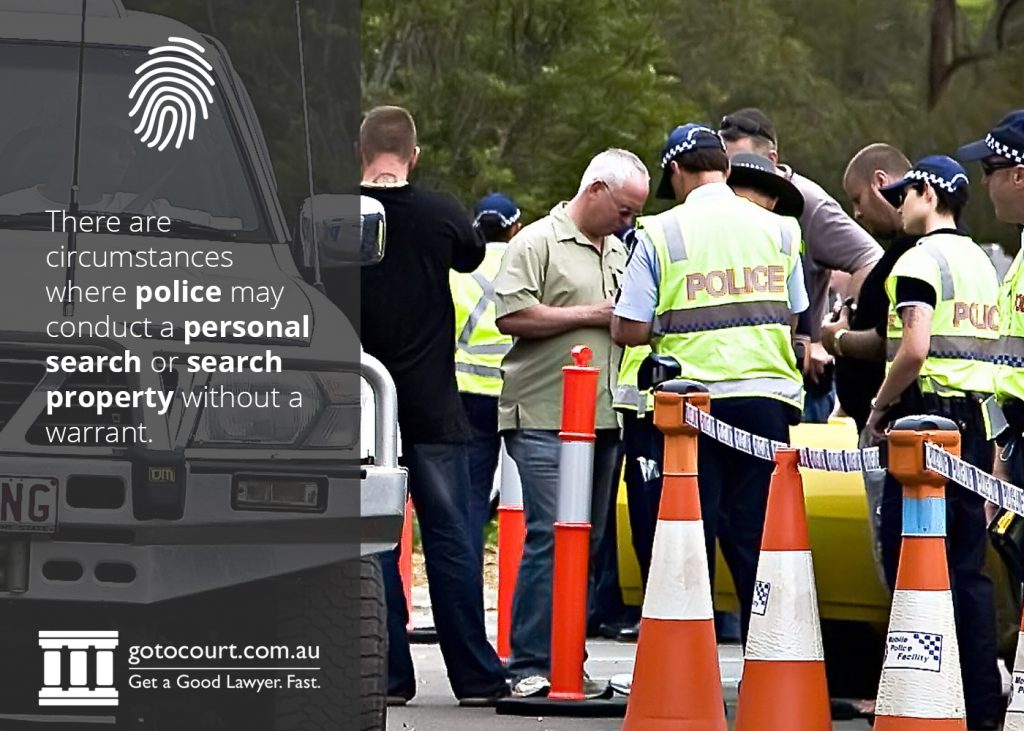 Police in Queensland must conduct personal searches under the Police Powers and Responsibilities Act 2000 (Qld). Police do not have an automatic right to conduct a personal search unless they reasonably suspect you have the following in your possession:

Police can stop and detain you for the purposes of conducting a search without warrant if they reasonably suspect you have any of the above in your possession. Queensland must ensure embarrassment to you is minimal and they must take reasonable care to protect your dignity while conducting the search.

More information can be found in our dedicated article, Personal Searches in Queensland.

Personal searches in New South Wales are regulated under the Law Enforcement (Powers and Responsibilities) Act 2002 (NSW). This Act provides NSW police with the power to stop, search and detain anyone in which the police have reasonable grounds or reasonable suspicion to conduct the search.

In NSW, personal searches can be conducted before or after an arrest is made. Police are required to show proof that they are police, state their name, station and the reason for the search. They must also state that failing to comply with the search will result in an arrest.

There are two types of personal searches in New South Wales:

Police do not have the power to question you while you are being searched. More specific information can be read in our dedicated article, Personal Searches in New South Wales.

The Control of Weapons Act 1990 (Vic) and the Drugs, Poisons and Controlled Substances Act 1981 (Vic) govern how personal searches are to be conducted by Victorian police.  Victorian police have the right to search your person or your property in the following circumstances:

Police have the power to conduct a personal search without a warrant in a public place if they reasonably suspect any of the following:

More specific information can be found in our dedicated article, Personal Searches in Victoria.

There are two types of personal searches which can be conducted by Western Australian police:

Personal searches can be conducted by WA police with or without warrant. However, police must conduct personal searches in accordance with the Criminal Investigation Act 2006 (WA), Firearms Act 1973 (WA), Weapons Act 1999 (WA), Misuse of Drugs Act 1981 (WA), and Criminal Property Confiscation Act 2000 (WA).

Personal searches in Tasmania are conducted by police in accordance with the following legislation:

Under the above legislation, police have the power to stop, search and detain a person without a warrant in the following circumstances:

Tasmanian police can use as much force as necessary and reasonable in the circumstances to conduct their search. If the police reasonably suspect that a person is hiding drugs inside their body cavities, police must obtain a warrant from a magistrate. Only a medical practitioner can conduct such a search.

Further information can be found in our dedicated article, Personal Searches in Tasmania.

South Australian police must conduct personal searches in accordance with the Summary Offences Act 1953 (SA), the Controlled Substances Act 1984 (SA) and the Criminal Law (Forensic Procedures) Act 2007 (SA). Under these pieces of legislation, SA police have the power to search a person without arrest in the following circumstances:

In the first instance, police must use a metal detector to search for the presence of metal. This would indicate whether the person has a concealed weapon. If the metal detector senses a metal item, police can request the person to show them what it is. If the person refuses, the police then have the power to search the person.

South Australian police may use as much force as reasonably necessary when conducting a search.

Personal Searches in South Australia has further information to read.

Personal searches are conducted by NT police in accordance with the Police Administration Act (NT). Under the legislation, Northern Territory police can search a person when the circumstances are urgent or serious which requires an immediate search without a warrant.

NT police can conduct a non-intimate procedure personal search where they reasonably suspect a serious offence has been committed. This search includes the taking of saliva, hair or buccal swab samples and taking fingerprints. NT police can also conduct an identifying non-intimate search where photographs, hand and foot prints are taken.

If in custody, police can conduct an intimate procedure search but only with a Local Court Judge’s approval or your consent. More detailed information can be found in our article, Personal Searches in the Northern Territory.

Police can conduct personal searches in the ACT without warrant when there is reasonable suspicion that the person has evidence of a serious offence or unlawfully obtained property. ACT police can only conduct a personal search without warrant under the Crimes Act 1900 (ACT) and when it is necessary to prevent the loss or destruction of evidence or being of an urgent situation.

ACT police can conduct frisk searches. These types of personal searches involve a police officer of the same gender quickly running their hands or a metal detector over the person’s outer clothing.

Police also have the power to stop, detain and conduct a strip search of a person. The police officer must reasonably suspect the person has evidence in their possession and that a visual inspection of the body will show that evidence.

Customs officers under the Customs Act 1901 (Cth) have the power to inspect traveller’s luggage in any situation. Customs officers have this power even where there is no evidence to suggest a traveller has anything unlawful in their possession.

The Customs Act 1901 (Cth) also grants officers the power to conduct both frisk and external searches. In circumstances where there is reasonable suspicion that you are internally concealing an unlawful item, an internal search can be conducted. The officer must obtain an order from a judge and a doctor must carry out the search.