Administrative review in the NT (Northern Territory) refers to an application made to a court or tribunal to review on their merits administrative decisions made by government departments and officials. The NT is the latest jurisdiction to establish a super tribunal, known as the NT Civil and Administrative Tribunal, to conduct such reviews.

You can make an application for the judicial review of a government decision that applies to you to the Supreme Court of the Northern Territory. 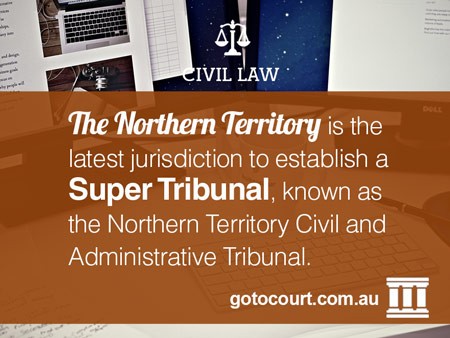 The NT Civil and Administrative Tribunal

The intention is that it will become a ‘one stop shop’ for dealing with all administrative decision disputes. Currently, the kinds of administrative decisions it can review is limited (see below under ‘Merits review jurisdiction’), but this is expected to grow over the next 2 years to cover over one hundred pieces of legislation.

As at April 2015, three separate Acts have been passed granting the NT Civil and Administrative Tribunal jurisdiction to conduct administrative review in the NT of administrative decisions (its review jurisdiction). The current scope of this jurisdiction can be found on the website of the Department of the Attorney-General and Justice. It currently includes, for example:

Areas not already in the Tribunal’s jurisdiction are likely to be covered by another Tribunal. For example, State taxation decisions can be reviewed by the Taxation and Royalty Appeals Tribunal.

How the Tribunal conducts a merits review

Proceedings begin in the Tribunal when the person who wants an administrative decision reviewed lodges an ‘initiating application‘ with the Tribunal. You will know whether a decision can be reviewed by the Tribunal because the original decision-maker is required to tell you at the time of giving the decision.

Unlike other jurisdictions such as NSW, decisions made by the Tribunal on an administrative review in the NT cannot be appealed internally. However, if you are unhappy with a decision of the Tribunal, you can apply to the Supreme Court of the NT to review it, but only on a question of law. You can only make such an application with the leave of the Supreme Court.

The process of establishing ‘super tribunals’ like the NT Civil and Administrative Tribunal is based on the Commonwealth model for reviewing administrative decisions. However, unlike the Commonwealth, some jurisdictions including the NT have decided not to pass laws explaining what judicial review is and how it is conducted. Instead, judicial review in the NT relies on the rules created by the common law.

Supreme Court of the NT