If you are found guilty of a criminal offence in the Northern Territory, the sentencing judge may, depending on the nature of the offence and the other penalties imposed, choose to record a conviction for the offence, or to sentence you without recording a conviction. The rules for doing so are contained in the Sentencing Act. If a conviction has been recorded, you will have a criminal record that must be disclosed in certain circumstances. However, after a certain period of time, some convictions become ‘spent’, meaning you have a right not to disclose them, subject to some exceptions. All of the States and Territories (other than Victoria) have a spent convictions scheme. The Northern Territory’s is contained in the Criminal Records (Spent Convictions) Act. The Commonwealth also operates a spent convictions scheme that applies to Northern Territory criminal offences with a federal aspect, which is contained in the Crimes Act 1914. 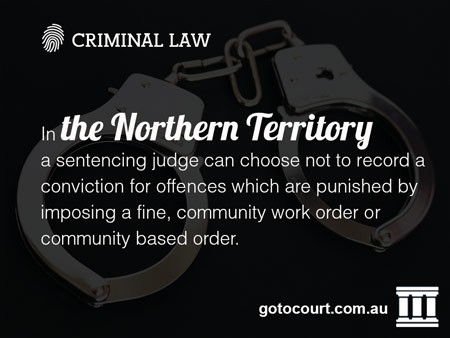 Under the Sentencing Act, a sentencing judge can choose not to record a conviction for offences which are punished by imposing a fine, community work order or community based order. If you are sentenced to imprisonment for committing an offence, a conviction must be recorded. The Northern Territory has mandatory imprisonment laws for a number of violent offences, meaning in a lot of cases, a conviction must be recorded. When the Judge decides whether to record a conviction or not, they must take into account a number of factors such as whether the offence was of a trivial nature, the age, mental or health condition of the offender, and whether the offence was committed in extenuating circumstances. Unfortunately, if you are found guilty of an offence but no conviction is recorded, then your criminal record will not be an “irrelevant criminal record” for the purposes of Northern Territory anti-discrimination laws. This means a person (e.g. employer) can be discriminatory against you on the basis of your criminal history despite not having a recorded conviction; for example, by refusing to employ you.

The Commonwealth has had a spent convictions scheme since 1990. Under the Crimes Act 1914, criminal offences under that Act become spent automatically after 10 years for an adult and 5 years for a minor. However, this rule only applies to convictions where you were not sentenced to imprisonment for more than 30 months. The effect of the conviction being spent is you have a right not to disclose the offence to an Australian Commonwealth authority or a State authority, including such an authority in a foreign country. Exceptions apply to this general rule; for example, if you work with or are seeking to work with children, and a body is required or permitted to collect that information under a law. Furthermore, if you are convicted of a further offence during the “waiting period” mentioned above, the “waiting period” may restart from the time you were convicted of the further offence.

Stealing Offences (NT)
In the Northern Territory there are various stealing offences, most of which are governed by the Criminal Code 1983. While the offence of stealing is a property offence, some offences involving theft are composite offences, meaning they involve both property and violence. This article will outline the main offences relating to stealing in the Northern…
Read more…

Criminal Responsibility (NT)
Under the Northern Territory Criminal Code Act 1983, there are a number of ways that a person can be found guilty of an offence even when they did not commit the physical acts that make up the offence. A person has criminal responsibility for criminal acts that they assisted, prepared for, attempted to commit, or…
Read more…

Youth Detention (NT)
The Northern Territory has two youth detention centres, Don Dale Detention Centre in Darwin and Alice Springs Detention Centre. Government statistics reveal that the majority of young people in detention in the NT are being held on remand, with only a small minority having been sentenced to detention. The overwhelming majority of children held in…
Read more…

NTCC Reports On Youth Detention (NT)
On the 6th June 2019 the NT Children’s Commissioner Colleen Gwynne delivered her independent monitoring reports on the two youth detention centres in the Territory. The reports found numerous shortcomings in the facilities and the procedures followed when dealing with youths who were at risk, separated or in lock-down. They also found the provision of…
Read more…