Restraints of trade in the NT (Northern Territory) are clauses which may be included in your employment contract to prevent you from doing certain things that compete with your current or former employer, or in a business sale agreement to prevent the seller from starting up a business in competition with the business which is sold.

In each of the Australian States and Territories (including the NT), restraint of trade clauses are generally regulated by the common law and some provisions in the Competition and Consumer Act 2010 (Cth).

The only exception to this rule is in New South Wales, which also has additional legislative rules for courts interpreting restraint of trade clauses. 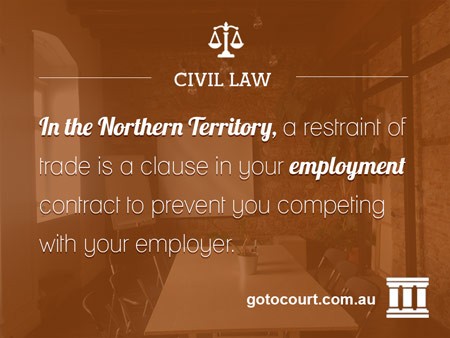 Kinds of restraint of trade clauses

Clauses regarding restraints of trade in the NT are drafted in many different ways. With restraint clauses in employment contracts, most will only take effect after your employment ends. For example, the clause may stipulate that for a certain period after your employment you cannot approach, solicit or advertise to your former employer’s customers for business. Alternatively, it may prevent you from working for a competitor for a certain period of time, or it may prevent you from using or disclosing your former employer’s trade secrets.

Generally speaking, the clause will only last for a certain period of time and within a particular geographical area; otherwise, a court may deem it unenforceable for not being reasonable (see below). A restraint of trade clause can also take effect during your employment; for example, stopping you from running a side-business that competes directly with your employer. If you are starting a new job and there is a restraint of trade clause in your proposed employment contract, you should discuss it with a lawyer.

Restraints of trade in the NT may be unenforceable

Under the common law, clauses stipulating restraints of trade in the NT are, as a general rule, void and unenforceable. This is because the law accepts you have the right to use your skills of your profession or trade as you see fit. However, restraint of trade clauses are enforceable if your current or former employer has a ‘legitimate interest’ to protect and the duration and scope of the restraint is ‘reasonable’. Your current or former employer has the onus of showing that this is the case. If they satisfy this onus, the onus then shifts on you to show why the clause is not in the public interest.

What is a legitimate interest?

However, simply preventing competition generally is not enough to be a legitimate interest. As such, restraint of trade clauses are mostly used in industries that rely on trade secrets to be competitive, such as the pharmaceuticals industry.

The reasonableness of a restraint of trade clause depends on the circumstances. If it goes beyond what is required to protect the employer’s legitimate interests, it will likely be unreasonable.

If it is unreasonable, a court in the NT cannot ‘read down’ the clause to something more reasonable; only courts in New South Wales have this power. This means the clause will simply be unenforceable.

Some of the factors which are relevant to whether a restraint of trade clause is reasonable include:

Enforceable restraints of trade in the NT

If your employment contract includes a reasonable restraint of trade clause, you must comply with its terms. If you do not, your former employer may seek an injunction to prevent you breaching it, or alternatively damages to compensate the employer for lost business or goodwill.

You may be able to argue that the restraint of trade clause is not in the public interest; for example, because you are a doctor or a scientist in leading medical research.

To take advantage of this, some employers include cascading restraint of trade clauses in employment contracts. A cascading clause has multiple overlapping restraints, the first restraint having the widest scope, and the next and subsequent restraints reducing in scope. Each sub-clause (individual restraint) is stated to be severable from the rest if the Court finds it to be unreasonable. Consequently, it allow the Court to interpret the restraint by ‘reading it down’, such that at least one of the restraints will be enforceable, even if the others are not.