Consumer claims in the NT (Northern Territory), or disputes between traders and consumers are mostly dealt with by Consumer Affairs, which is part of the Department of Justice and the Attorney General.  Its main role is enforcing the Australian Consumer Law, which is in the Competition and Consumer Act 2010.   It also plays a role promoting the interests of consumers and keeping them informed of their consumer rights. 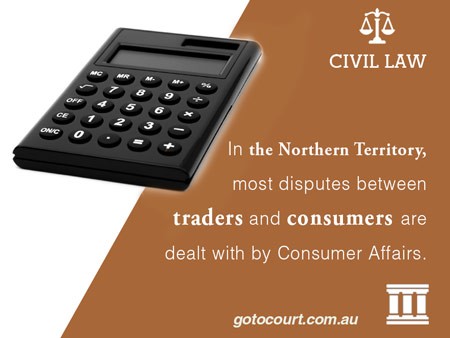 The role of Consumer Affairs NT

Consumer Affairs NT was established under the Consumer Affairs and Fair Trading Act (NT).  Certain kinds of consumer claims in the NT are dealt with by specialist Commonwealth and NT tribunals.  For example, complaints relating to food labelling can be made to the Department of Health and Families and disputes relating to product safety and scams can be made to the Australian Competition and Consumer Commission.

As a result of the Small Claims Act 2015 and the Justice Legislation Amendments (Small Claims and Other Matters) Act 2016, the hearing of consumer complaints for matters up to $25,000 has now passed to the NT Civil and Administrative Tribunal which commenced operation in 2015 as a ‘super tribunal’.

Kinds of consumer claims in the NT

Under the Australian Consumer Law, traders are subject to a number of restrictions which are designed to protect consumers from being unfairly treated.  For example, traders cannot engage in certain unfair practices such as:

Some of these activities are offences.

The Australian Consumer Law also gives consumers certain guarantees.  For example, there is a guarantee that the goods will be of an acceptable quality, and fit for the purpose for which they were advertised.  A consumer is also entitled to certain rights in relation to being granted a refund or replacement when a product is faulty.  Disputes in relation to motor vehicles are also common; for example, if your car is put in for a service and you get hit with a hefty bill for repairs that are conducted before you are warned about them, the repairer may have made an ‘unsolicited supply’.

Making a complaint to Consumer Affairs

To make a formal complaint to Consumer Affairs, you must lodge a complaint form.  The form requires you to give Consumer Affairs certain information about the dispute, such as the goods or services being complained about, and whether you have any documentation such as emails or letters that support your claim.

Before you lodge a complaint, you must try and resolve the dispute yourself with the trader.  If you fail to do so before making a complaint, Consumer Affairs may decide not to assist with resolving the dispute.  You can, for example, talk directly to the trader or write them a complaint letter setting out ways the dispute can be resolved and stipulate a time limit for the trader to respond.

What if conciliation fails?

If conciliation fails, you can bring a claim against the trader in a court or the NTCAT, depending on the value of the claim.  If it relates to an amount which is less than $25,000, then the claim must be commenced in the NTCAT by filing an initiating application.

NTCAT has published a factsheet which provides guidance on how small consumer claims in the NT are initiated and dealt with by the Tribunal, and what your rights are if you are a trader and a claim is brought against you.  If the dispute relates to an amount between $25,000 and $250,000, claims can be brought in the Local Court under its normal jurisdiction and rules.  The Court may require parties to attend a mediation in an attempt to resolve the dispute without recourse to litigation.