All employees and employers in the Northern Territory are covered by the National Fair Work system, which aims (amongst other things) to protect workers from harassment and bullying.

Workplace bullying is persistent or repeated unwelcome behaviour including treating an employee or employees in a way which harms, degrades, intimidates, offends or insults them. 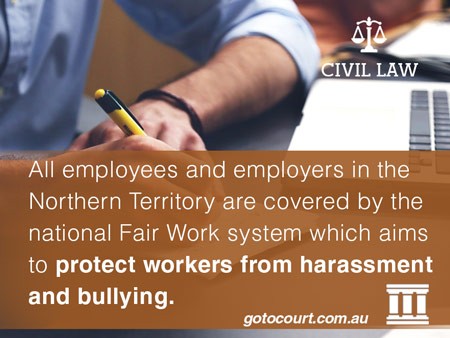 It can be directed at any employee, including contractors or subcontractors, apprentices and trainees, work experience participants and volunteers, and outworkers.

Harassment or bullying on the basis of race, sex or another attribute may also be a breach of the anti-discrimination provisions of the Northern Territory and Commonwealth legislation.

Many employers will therefore have policies in place regarding equal opportunity and bullying and harassment, as well as grievance resolution procedures setting out how employees can make complaints and how those complaints will be investigated.

If bullying or harassment is happening at work, the first step is to report it to a supervisor or manager, a workplace health and safety representative, the human resources department or the Union.

Applications for an order to cease bullying

All workers in the Northern Territory who are experiencing bullying or harassment may bring an application to the Fair Work Commission for an order to prevent the bullying from continuing.  Volunteers, contractors, outworkers, apprentices and trainees are also covered by the anti-bullying provisions in Part 6-4B.

The Fair Work Commission does not have the power to make any orders for compensation.

Under the Work Health and Safety Act, employers must take all reasonably practicable steps to remove or minimise any risks to the health and safety of their workers. Employers who fail to do so could be in breach of the Act and could, in some circumstances, be open to prosecution. Workers also have duties under the Work Health and Safety Act, including a duty not to expose anyone to work safety risks. Bullying or harassment could be considered a breach by the perpetrator of a worker’s duty under the Act and that worker could be punished under the Act.

Other criminal and civil remedies

In some circumstances harassment may constitute a criminal offence. Examples of these would be:

These matters can be reported to the police for them to consider charges under the Criminal Code. An application for an apprehended violence order can be made under the Personal Violence Restraining Orders Act.

An employee could have a claim for breach of contract. This would depend on the wording of their contract of employment and their employers polices. If, for instance, the employer has a policy that sets out how workplace bullying and harassment will be addressed and that policy is an obligation under the contract of employment there may be a claim.

There are time limits on lodging civil claims; for breach of contract this is 6 years.