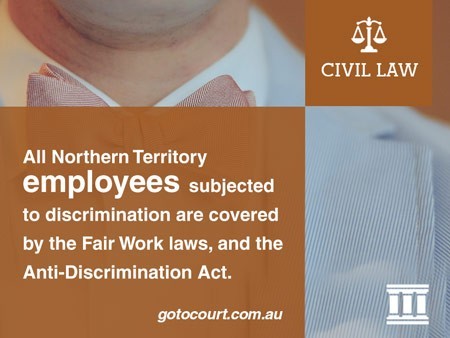 In the Northern Territory,  discrimination on the basis of certain attributes is unlawful under Section 19 of the Anti-Discrimination Act .

The prescribed attributes include:

Conduct prohibited under the Anti-Discrimination Act

The Anti-Discrimination Act also prohibits conduct which is associated with discrimination, such as sexual harassment, victimisation, failing to accommodate a special need, refusing a guide dog, or requesting a person to provide unnecessary information upon which a discriminatory decision or conduct could be made.  Sexual harassment is defined as an unwanted request or demand for sexual favours, or an unwanted act of physical intimacy, with the intention of humiliating or offending the person on the receiving end, or where it is reasonably foreseeable that the person would be offended, humiliated or intimidated.

Making complaints of workplace discrimination in the NT

The Commissioner may accept a complaint which is lodged after the six-month time limit has expired. However, a complainant must detail why he or she is late in making the complaint and demonstrate that the complaint has merit.

The Commissioner has jurisdiction to investigate a complaint in any manner he or she considers fit, after which he or she may:

Parties are obliged to attend a conciliation conference if they are ordered to do so. Failure to attend the conference may result in a fine.

Possible outcomes of a complaint

If the Commission hears a matter and determines that discrimination has occurred, it may:

If the Commission dismisses a complaint because it considers that it is vexatious and frivolous, it may also make an order that the complainant pay the respondent’s costs of up to $30,000.

Termination of employment for discriminatory reasons

If the conduct has not resulted in the termination of the person’s employment, but in other adverse action such as demotion and denial of opportunities such as training and promotion, then an application may still be made to the Fair Work Commission under section 372 of the Act.

If you require legal advice about workplace discrimination in the NT or about any other legal matter please contact Go To Court Lawyers.